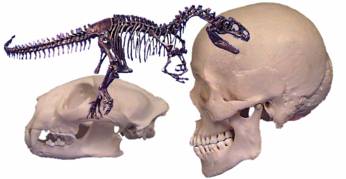 ANTS, a museum-based design group, uses Apple products and technology to capture and document these rare and valuable pieces. Fossils are catalogued and stored for use in creating 3-dimensional models. Digital photography, computer based illustration, and internet research are utilized to further inspire, nurture and fuel the curious mind.

In his recent trip to Africa, Dr. Wagner used an Apple QuickTake 150 camera to take the pictures you will be seeing in this three day story layout. Dr. Wagner travelled with a Macintosh PowerBook 1400 in his visits with the Leakey's, The National Museums of Kenya, the collections room, the vault, and even a safari.

ANTS was founded by Dr. Stephen Wagner with a simple but profound mission: To create inspiring educational tools that nurture and fuel the curious mind. Dr. Stephen Wagner and his team take the multiple techniques used to create museum displays and utilize them to develop products that can be purchased and taken home. They hope that their products can extend the excitement of a day at a fine museum to the home or classroom.

Members of the legendary Leakey family first saw Dr. Wagner's work in early 1996. Dr. Craig Black, the former director of the L.A. County Natural History Museum in Los Angeles took the ANTS team to Kenya. The Leakeys suggested that they visit the National Museums of Kenya to discuss several cooperative projects. They met with both Meave and Richard Leakey who also use Macintosh computers. "We have discussed developing a Web page," said Dr. Wagner. "The idea is for the page to act as a living example of how Apple and web technologies can serve Science and Technology."

As the capabilities of the Macintosh expand, their ability to exploit that technology also expands. Digital photography, computer-based illustration, and internet research are central to the everyday working of the company. One example is their use of Apple's QuickTime VR technology to document the fossils at the National Museums of Kenya. They are also beginning to use computer technology to scan fossils and produce product masters using rapid prototyping techniques.

Dr. Wagner's experience with the Macintosh predates ANTS. "I couldn't have started the company without it," said Dr. Wagner. "The Macintosh platform allows for the quick organization of data and the rapid development of graphic images. We do everything on the Mac from running the business to creating our products." Their first efforts were the design and construction of a scale model of the dinosaur, Allosaurus fragilis, and a series of half-scale skeletal models that illustrate the evolution of the human skull. Their dinosaur was used as a reference for some of the new dinosaur exhibits at the Denver Museum of Natural History. The Macintosh was used to modify and scale the hundreds of complex bones that comprised the Allosaur project. The text and the illustrations for the book that accompanies the model were created entirely on the Macintosh.

ANTS work can be seen in US and Japanese museums-the Smithsonian, The American Museum of Natural History in New York, and The Maxwell Museum of Anthropology. Their products have sold in Signals, a catalog connected with public television, major science catalogs directed at teachers, and The Dinosaur Society catalog. They will also be featured in the forthcoming National Geographic Society catalog. 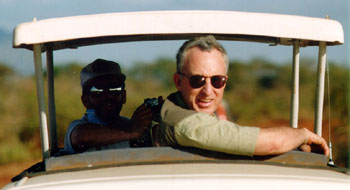 Dr. Stephen Wagner is a dental specialist living in Albuquerque, New Mexico. He was trained at the University of New Mexico, the University of Southern California Dental School, and M.D. Anderson Cancer Center in Houston, Texas. Dr. Wagner's specialty is maxillofacial prosthetics, dealing with the construction of prosthetic devices that support patients with cancer, congenital defects and traumatic injury to the face. He is not a surgeon but rather more like a medical sculptor. 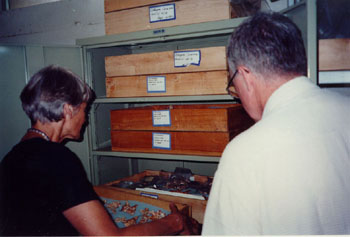 In a large U-shaped room on the third floor of the Louis Leakey Building, a vast collection of fossils is broken down into taxon. Fossil elephants are found in one area, fossil rhinos in another. Drawer after drawer is filled with everything from bat teeth and antelope skulls to monkey bones and fossil insect larvae. Human remains are are kept hidden in a vault in another part of the building. Entry there is strictly monitored. Each sliver of fossil is considered a world treasure and is guarded as if it were the crown jewels.

Dr. Meave Leakey is our guide. A distinguished paleoanthropologist in her own right, Meave is head of the Museum's paleontology section. She has recently extended our knowledge of human ancestry by millions of years with the discovery of Australopithecus amenensis, quite possibly the first animal to walk upright in a similar fashion to our modern human gait.

The name Leakey has long been synonymous with the quest for our earliest human ancestors. Their tenacious efforts--Louis and Mary searched for over 30 years before they made their first significant human find--have been extremely well documented by the National Geographic Society and other media. 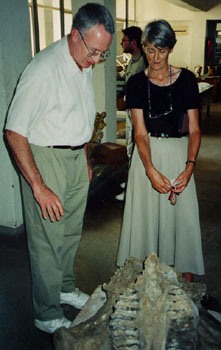 Mary Leakey found Zinj (Australopithecus boisei) in 1959, whose reconstructed bones were soon described in and shown on the cover of the National Geographic Society Magazine. It was Louis that insisted Africa was the birth place of our species rather than Asia, as was the popular thought of the time. And it was Richard's uncanny intuition and hard work that filled the museum with the abundance of fossils that we see here. This collection represents the accumulated finds of over fifty years of fossil collecting in East Africa.

The Vault, as experienced by Dr. Stephen Wagner

If any paleoanthropologist made a short list of professional hotspots in the field of human evolution, the vault of the National Museums of Kenya would be foremost. The most the important paleohuman fossils found by the Leakey family and others in Kenya are housed there. Most scientists have seen casts of these specimens, few have seen the originals.

The vault itself is literally that, a steel-lined room guarded by a large bank-like door that requires two keys to open. One key is kept with the supervisor of the vault room, the other with a member of the professional staff. When first entering the vault, I noticed rows of steel shelves lining the walls of the large room. A gray worktable was placed in the center. No one is left alone in the room, a member of the museum staff is always in attendance.

"Well Steve, What do you want to see?" said Meave. 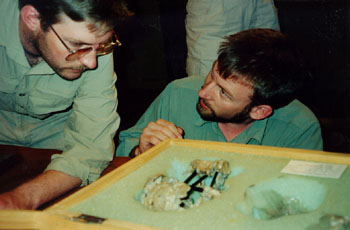 I immediately forgot the name of every specimen housed there. Any anthropology student could make a list of the Leakey paleohuman fossils, but I couldn't think of one. I finally said that I would like to see the Turkana boy. That got the ball rolling. Dr. Leakey's assistant brought out a hinged wooden box that housed the skull and cervical vertebrae of one of the most important finds in the history of human evolution. The skull is part of a more complete skeleton, in fact the most complete skeleton of an early paleohuman ever found. He was a young boy, probably in his early teens according to his dental development. He was not a modern human, but rather a Homo erectus, an early example of our genus. He was tall and stood erect--not at all like the old image people have of ancient humans. His brain was smaller and he had the large brow ridges that are typical of his species. His skeletal remains were found by members of the museum and by Dr. Alan Walker, a paleontologist living in the United States. Dr. Walker was largely responsible for the interpretation of the remains. His experiences were detailed in his new book, "The Wisdom of the Bones". I was thrilled to see the Turkana skull, face to face. 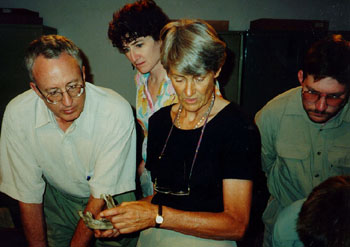 We spent a good part of the afternoon examining the vault's many treasures. I asked to see Mary Leakey's skull of Proconsul, her first significant find and one of the oldest fossils in the collection. Other famous bones came out for our inspection. Meave used replicas of the specimens to illustrate important anatomic features, since handling of the actual specimens is kept to a minimum.

As we left the vault, I gave thought to my many friends at the Anthropology Department of the University of New Mexico. I wish they could have shared this experience with me. It is my hope that these experiences will translate into products that express some of the intellectual satisfaction that we experienced during our visit to the National Museums of Kenya.