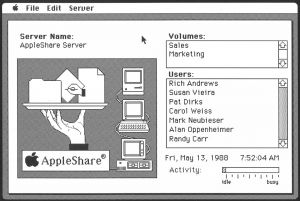 The AppleShare File Server lets members of your workgroup use an AppleTalk network system to share information quickly and easily. AppleShare turns a dedi­cated Macintosh II, Macintosh SE, or Macintosh Plus personal computer with one or more hard disk drives into a central electronic filing cabinet. Here, everyone in your workgroup can store documents in folders similar to the ones that are common to all Macintosh applications.

By giving everyone access to the same documents and applica­tions, the AppleShare File Server simplifies and speeds up the work of the group - whether it involves creating budgets, updat­ing data files, producing publica­tions, or assembling reports. And AppleShare has a powerful set of privacy features that let you con­trol who has access to the infor­mation stored in each folder, and what type of access is allowed. AppleShare will greatly increase the productivity of any environ­ment equipped with Macintosh, MS-DOS, and even Apple II computers.

Administration of the Apple­Share File Server requires no special skills. Administrative functions, such as adding new users and creating groups of users, are carried out using the familiar Macintosh user inter­face, including pull-down menus, dialog boxes, icons, and windows.

To ensure privacy, security, and control over information shared with others on the network, AppleShare lets individual users decide who can have access to information stored in folders they create on the server, and what type of access they can have. The folder's owner can as­sign access privileges to three classes of users:

The folder's owner can also define which of three levels of access the owner and other users can have, namely, whether users can:

Documents stored in "drop box" folders can be seen and changed only by the owner. However, other users with the appropriate access to the serv­er can copy documents into the drop box. This is useful for collecting and storing sensitive documents such as expense reports and personnel evaluations.