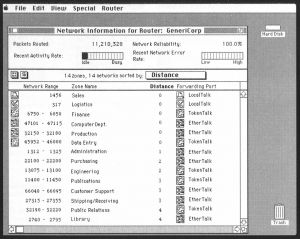 The AppleTalk Internet Router lets you increase the size and improve the performance and manageability of your AppleTalk network system. It allows AppleTalk networks such as LocalTalk, EtherTalk, and TokenTalk to be interconnected to form an internet. The router moves data from one network to another transparently so that the internet functions like a single network. This means that users can share files and printers across the internet, as well as send and receive mail, in the same way that they access these resources on a single network. A key component of the AppleTalk network system, the AppleTalk Internet Router offers room to grow for even the largest networking installations. Features such as extended addressing and improved zone-based access to internet resources let network professionals build for the future. As with other Apple Macintosh products, the AppleTalk Internet Router is easy to use. Even a network novice can have it running in minutes and begin to make use of its powerful features.

The AppleTalk Internet Router lets users build large internets that span a company or cam­pus. An AppleTalk internet can support as many as 16 million devices (nodes). These can be distributed over as many as 1,024 interconnected networks, or can be allocated to one large network such as those that use data link bridges to interconnect local area networks.

The AppleTalk Internet Router identifies all network connec­tions installed on the Macintosh serving as the router. You simply enter a network number range for each network you want to interconnect. Zone names can be defined to streamline directory services on large internets. The rest is automatic, because the AppleTalk Internet Router dynamically communicates with other AppleTalk routers to build a table of the entire internet. Users can then view and access resources through­out the internet.

The AppleTalk Internet Router can be used to improve internet reliability. Most network problems remain isolated to a single network. By using a redundant route topology, internet traffic can be rerouted in case of a failure in a particu­lar network.

The router lets network planners fine-tune their AppleTalk systems by isolating local traffic from internet traffic, and by providing a choice of topology and network perfor­mance to accommodate the most demanding network environments.

AppleTalk Internet Router software runs in the back­ground on a Macintosh computer, allowing the router to share the same Macintosh as the AppleShare File and Print Servers, as well as third-party mail servers. The router uses between 120K and 160K of system memory, depending on the number of networks in the internet.

The improved routing protocol of AppleTalk Phase 2 sends data directly to the router along the shortest path to the destination, increasing internet performance.

Through the router desk accessory, you can display various windows that let you monitor activity and network statistics on the router, view an active routing table of the entire internet, change the router setup information, or print the contents of the setup and administrative displays.

Zone Multicast, provided on EtherTalk and TokenTalk networks, allows a message to be sent to all members of a par­ticular zone without disturbing other nodes on the network. Zone Multicast improves network performance by reducing traffic overhead caused by broadcasts.