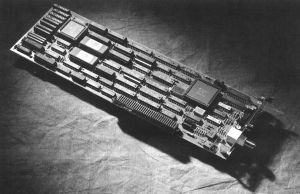 The Apple Coax/Twinax Card is an expansion card that allows personal computers in the Macintosh II family of systems to connect to an IBM SNA network as 3270 Information Display Systems, via industry-standard coax cabling. The card allows users to access mainframe-based 3270 applications in the same manner as they would from a terminal, while enjoying all of the benefits of Macintosh technology for their local applications. The Apple Coax/Twinax Card also has a twinax connector for future 5250 terminal emulation support.

This intelligent NuBus inter­face card has its own 68000 microprocessor, memory, and multitasking operating system. Operating independently of the main Macintosh II processor, the Apple Coax/Twinax Card supports the execution of com­munications protocols with minimal access to the Macintosh II processor and operating system. And because all of the communications processing is done on the card, Macintosh applications can run more effec­tively under MultiFinder.

The MacDFT application software works with the Apple Coax/Twinax Card to allow single-session Control Unit Terminal (CUT) emulation or up to five-session Distributed Function Terminal (DFT) 3270 emulation. Files can be trans­ferred to or from mainframes running VM/CMS or MYS/TSO using the IBM IND$FILE package.