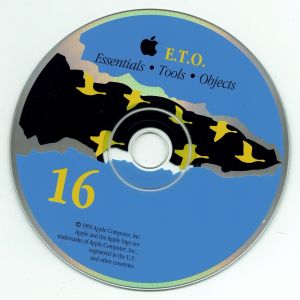 E.T.O. is a product designed specifically for professional Macintosh software developers. It brings together a deluxe collection of Macintosh core development tools, designed to support C, C++, and assembly-language programmers who are writing software to support System 7.x/8.x. It contains a robust development environment (Macintosh Programmer's Workshop), compilers, debuggers, application and component frameworks, and testing tools that you can use to streamline application development for 68K and Power Macintosh systems.

The major components of E.T.O. are as follows:

The Shell is the centerpiece of the Macintosh Programmer's Workshop (MPW) development environment. It is an integrated multiwindow text editor and command executer which supports numerous built-in commands and a powerful scripting language that allows you to customize the environment to suit your needs. The Shell also includes Projector, an integrated source code control system that simplifies the management of large, complex software projects being worked on by a team of programmers. Read our 50 MPW Advantages document!

SC and SCpp are ANSI-compliant 680x0-code-generating C and C++ compilers that are faster than previous compilers included with MPW, run in native mode on a Power Macintosh, and support the CFM-68K runtime model.

Dozens of tools and scripts are included to assist you in the development process. These include linkers, a Make tool, resource manipulation and analysis tools, file comparison utilities, and many more.

OpenDoc Development Framework (ODF) is a robust object-oriented framework which you can use to simplify the creation of cross-platform Live Objects. ODF makes the process of building an OpenDoc component easier by implementing much of a component's default behavior.

SourceBug is a source-level debugger that provides basic debugging capabilities for 68K applications, such as setting breakpoints, controlling program execution, and displaying the contents of variables. It also has special support for debugging object-oriented code.

The Macintosh Debugger is a powerful PowerPC debugger featuring an easy-to-use interface that allows you to set breakpoints, examine and change the contents of memory and registers, and view your code at either the assembler and source level. It can also be used to trace your application's execution or gather performance data. It works in a one-machine or two-machine environment, thus allowing you to debug almost any type of code running on the target system. The Power Macintosh Debugger can be used with symbol files emitted by MPW, Metrowerks CodeWarrior, and Symantec C++ for Power Macintosh environments.

MacsBug is a low-level debugger for debugging software at the assembly-language level (680x0 or PowerPC). It loads at system startup time and idles until it is invoked either manually (by pressing the interrupt switch or a key that you define) or programmatically (by calling special traps from within your program). And since MacsBug needs so little of the system to operate, it can be used even in the case of fatal system errors.

ResEdit is a graphical resource editor for creating and editing elements of the Macintosh user interface such as menus, windows, icons, dialog boxes, and other standard data structures. Programmers and advanced users can quickly create portions of their application's user interface as well as modify an existing interface.

This is a useful on-line reference tool which provides rapid up-to-date access to information on all aspects of the Macintosh API, including toolbox managers, data structures, routines, constants, resources, and MPW commands. MPW scripts and tools are also provided that let you access it directly from the MPW environment using "hot keys". It is also easily accessible from CodeWarrior or Symantec C++.

Virtual User is a test automation system that enables a host Macintosh to control the actions of target Macintosh computers remotely. The host executes tests on one or more target machines by reading the commands it is to issue from a file called a script. The script is a text file written in the Virtual User scripting language. This interpreted procedural language provides Virtual User with the ability to recognize and manipulate various elements of an application's human interface, compare the actual result of a command with an expected result, and branch logically according to the result of the comparison.