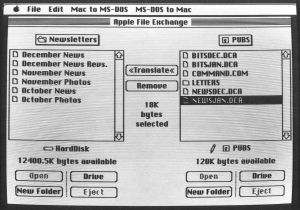 The File Exchange utility from Apple Computer was used to transfer files off of compatible DOS disks on a Macintosh system. The PC Exchange control panel in System 7.5 replaces this by simply mounting DOS volumes onto the desktop.

The Apple File Exchange utility program allows a file or docu­ment created by one application to be translated into the format required by another application. When used with the Apple PC 5.25 Drive, it transfers and trans­lates between Macintosh and MS-DOS environments, or with a Macintosh 3.5-inch drive, it transfers and translates between Macintosh and ProDOS formats. It can also be used with data files transferred to Macintosh disks via network or data communications links.

The Apple File Exchange program works with "translators" that control the conversion of file formats between dissimilar applications. The package includes translators to handle some common translations. Many applications feature an import option that does translation. The binary translator included with Apple File Exchange allows documents to be converted for use with these applications. The text translator translates bidirectionally between plain text formats of the MS-DOS, Macintosh, and ProDOS operating systems. The DCA-RFT/MacWrite translator translates bidirectionally between IBM Document Content Architecture Revisable Text Format and the MacWrite format.