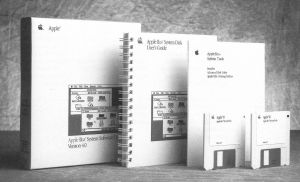 The Apple IIGS System Software Version 4.0 gives you all the advantages of the latest system software for the Apple IIgs per­sonal computer. It features a new operating system - designed ex­clusively for the Apple IIgs - that takes advantage of the computer's advanced hardware features to greatly enhance performance. This new operating system, GS/OS, improves the startup time, and speeds up disk access, program launching, and file copy and transfer tasks. It in­cludes File System Translators that enable applications to di­rectly access files created using other file systems, such as the ISO/High Sierra file system used by CD-ROM applications. GS/OS also provides complete compatibility with ProDOS 16, which it supersedes.

In addition to the new oper­ating system, the Apple IIGS System Software Version 4.0 offers several features that signif­icantly improve the computer's functionality and ease of use, including a revised Finder and two new utility programs. The Finder (a graphics-based interface that allows you to manipulate files on the desktop) has been enhanced to take full advantage of the capabilities of the Apple IIGS system. In addition to providing support for disk parti­tions and other new features, the Apple IIGS Finder is now easier to use, faster, and more informa­tive than the earlier version.

The Advanced Disk Utility features an easy-to-use, graphics-­based interface, and allows you to initialize, erase, and partition hard disks, as well as both 5.25-and 3.5-inch floppy disks. The Installer lets you update your startup disks and customize their configuration for your system and its attached peripherals.

The GS/OS operating system was developed specifically for the Apple IIGS personal com­puter, so it takes full advantage of the system's hardware to provide performance improve­ments in all standard file and disk handling tasks. In particu­lar, in the area of file transfer, GS/OS supports access to vari­ous file systems via software modules called File System Translators (FSTs). This means that disks using a wide range of file systems may be accessed from the desktop simultane­ously, and that an application need not know what file sys­tem it is dealing with when it accesses a file.

To use the Apple IIGS System Software Version 4.0, you must have an Apple IIGS computer with at least 512K of random­-access memory (RAM) and ROM Version 01 or a more recent version, and at least one 800K 3.5-inch disk drive.