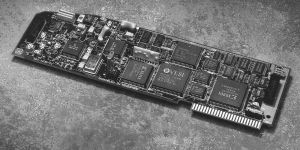 The Apple II Video Overlay Card offers Apple II computer owners a wealth of new possibilities for learning and creativity by merging two powerful channels of commu­nication - video and computing. The Apple II Video Overlay Card lets you superimpose Apple II screen images on video from a variety of sources - VCR, video­disc, video camera, or television. It also allows you to display the combined images on an RGB or composite monitor and to record them on a VCR.

You start by using the Apple II application of your choice to cre­ate your own text, graphics, or animations. Then, with VideoMix, the software included with the card, you can control where these overlays appear and blend them with the video to achieve the effects you want. With the Apple II Video Overlay Card and an Apple IIGS or IIe computer, you can add your own captions and notes to educational videos to clarify or highlight information. You can also create your own video productions and interactive appli­cations for use at home or in school. The results - whatever form they take - will be crisp, clear, and professional-looking.