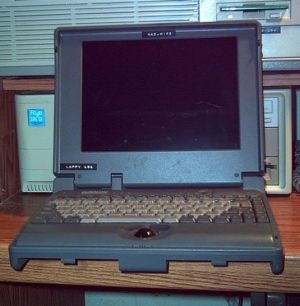 The NanTan FMAK9200 is a series of intel 80486 based laptop computers released sometime around 1994. They are multimedia laptop computers featuring SoundBlaster compatible audio and upgradable CPU's. They were sold as the Duracom 5110D, Prostar 9200M, and various others.

The NanTan FMAK9200 was released in 2 different variations. The 9200M used a 10.4" Passive DTSN LCD Panel capable of 64-shades of gray, while the 9200D had a DTSN Color 10.4" LCD capable of 4096 colors maximum on screen at once. Both of these went into a 1MB Cirrus Logic graphics chipset. Brightness and contrast were handled by keyboard hotkeys rather than traditional analog sliders or rollers on the computer.

Power was provided via a 19v power supply with a standard barrel style jack, or a pair of 9 volt 5 cell Nickel Metal Hydride (NiMH) Battery packs flanking each side of the bottom front of the case.

The pointing device was a trackball located in front of the spacebar on a palm-wrest more like a modern laptop with a trackpad. It offered a very smooth and accurate action, surprising for a budget laptop. By contrast the rubber dome keyboard was very spongy and a bit difficult to type on. However, the keyboard could be removed to access the CPU and RAM upgrades by simply pushing to latches at each side of the top with a screwdriver and simply lifting the keyboard off.

CPUs on these laptops can vary by brand and model, ranging from regular 5 volt models like the Intel 486 DX-33, SX-33, or DX2/66, but it also works with 3.3v CPU such as the 486 DX4-100 or AMD Am5x86 133.The CPU uses a "socket 1" press-fit socket and uses regular desktop processors rather than QFP or SMD versions, allowing for easy upgrading.

The memory, by contrast, consists of 4MB on board, upgradable with proprietary memory boards, which can allow for up to at least 24MB of RAM.