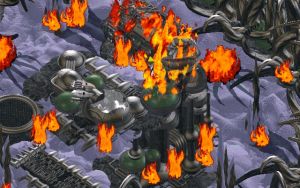 The Phantom Council is the judicial system of the future. After the council has handed down a guilty verdict on a planet, or its people, swift and brutal action is taken. The council does not rule on single people; only countries, their citizens and planets are judged. As the number one Phantom pilot, Jax, you provide the bulk of the verdicts, striking down cities and structures and rescuing P.O.W. personnel who are still captive long after the wars of the system have ended.

Fire Fight has a total of 18 single player missions that take you through 5 very unique worlds. These worlds include Ch'ok, the ice world, Jarventia, the jungle planet, Darius, the barren wastelands , and the tech world, Argus High. Your mission objectives will include Rescue, Reconnaissance, Seek and Destroy, and much more.

Fire Fight supports up to four players over Windows95 IPX/TCP networks and two players by modem in two uniquely different games: Fire Fight and Base Building.

In Fire Fight, your primary objective is to kill your opponents. You can play for a predetermined time period or until one player reaches a certain nuber of kills (both the time limit and kill limits are set by the player who creates the net game, the "server")

In Base Building, each player begins play at his own base, in a capture-the-flag-like game. The object is to collect a number of base pieces to completely build your base, and then return to your landing pad safely. As the number of pieces you collect increases, so does the size of your base and its defenses. Since there only a limited number of pieces on the board at once, the players often have to fight over them, and each time you're damaged, you lose pieces.

Both Fire Fight and Base Building are customizable. The person creating the game (the "server") can set the time limit or kill limit of Fire Fights and the number of pieces required to build a base in Base Building games. Other options which can be customized include how fast power-ups and inventory items respawn, and which items do or do not respawn. Another unique feature of Fire Fight is that, in multiplayer games, all of the players must agree on the level to be played. This way, no one person can determine which level you play.

Here are some of the features you will find in Fire Fight: