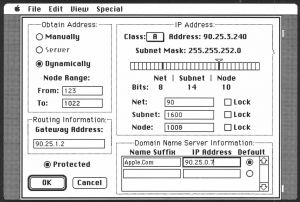 MacTCP was the standard TCP/IP implementation for the classic Mac OS through version 7.5.1. Open Transport should be used instead when possible for stability and compatibility reasons.

With MacTCP software, devel­opers now have a way to create Apple Macintosh applications for network environments that use TCP/IP protocols - a widely used standard for networking heterogenous systems. Licensed to third-party developers, Mac­TCP includes TCP, UDP, and IP protocols and conforms to Inter­net RFCs and MIL-STDs, thus ensuring interoperability with systems on the TCP/IP Internet. MacTCP runs over both Ethernet and LocalTalk-compatible ca­bling systems and is co-resident with AppleTalk protocols. It can be installed on a Macintosh II, Macintosh SE, Macintosh Plus, or Macintosh 512K Enhanced computer.

MacTCP consists of object code libraries and associated files for both C and assembly language development. Libraries include TCP and UDP interfaces along with a name-to-address resolver. A programmer's reference guide and an administrator's guide are provided.

Throughput is 3.0 megabits per second memory-to-memory (on a Macintosh II over Ethernet).