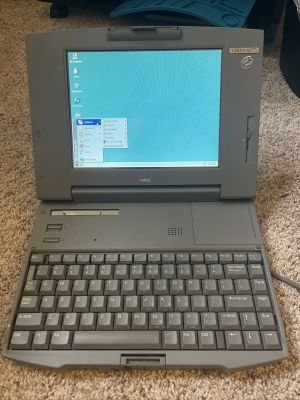 The NEC Versa M/75 is a part of the NEC Versa "M" Series notebooks released in mid 1994. They are a 486 DX4 based notebook computer, and NEC's first "Multimedia" model with a sound card. While appearing identical to the Ultralite Versa, Versa E, and Versa P, they are closer technologically to the Versa P-series. There was also a 100MHz M/100 model offered, as well as a AT&T Globalyst 250 version.

All models had the same basic feature set...

However, there were actually two different versions of the M/75 base unit. These were based on a new screen option offered in mid 1994 known as the M/75TC - for "True Color" which required special circuitry to work. These can be told apart by the model# on the bottom.

The electronic difference was a daughtercard that fit between the CPU card sockets on the motherboard that changed the way the LCD panel was handled. The standard NEC Versa either shipped with a Kyocera 9.4" DTSN Panel (M/75D) or a NEC NL6448AC30-10 9.4" LCD capable of 4096 simultaneous colors (M/75C, M/75CP), or a NEC NL8060AC24-01 800x600 LCD Panel (M/75HC). The M/75TC came with a special, industrial grade, NEC NL6448AC30-09 LCD panel with expanded circuitry to allow for 24-bit True Color support for people who needed photorealistic graphics on the go.

The Crystal CS-4231-KQ chipset is a Windows Sound System (WSS) compatible chipset called "Crystal Business Audio" based on the pre-loaded applications for Windows 3.1. It has no FM Synthesizer/Adlib support, and defaults most audio to 44000KHz 16-bit Stereo (CD Quality). It is also incredibly tricky to get working on certain DOS programs due to limited driver support in DOS.