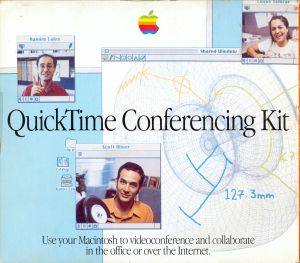 QuickTime Conferencing (QTC) is a new Apple Computer technology that helps developers add real-time sharing of sound, video, and data to their applications. This overview suggests the different ways you can use QTC to help users collaborate. The article describes the components that most developers will need to use to take advantage of QTC and discusses Watcher and Caster, two QTC applications that enable users to tune into network broadcasts and create broadcasts for others to view.

QuickTime Conferencing is a standards-based architecture that allows users to:

Apple is working with a wide range of companies including telcos, network, software and hardware providers and developers to provide a range of solutions that take advantage of the benefits of QuickTime Conferencing. These allies have announced that they expect to make products available in the second quarter of 1995.

From the home office to university campuses to the multinational enterprise network, QuickTime Conferencing will allow users to communicate with people across the country or across the world. Users won't have to worry about whether their hardware equipment, networking equipment and applications are compatible with the solutions being used on the other end of the network line. QuickTime Conferencing is designed to be fully operational with H.320 standards-based systems.