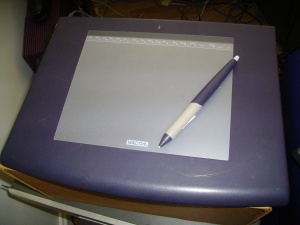 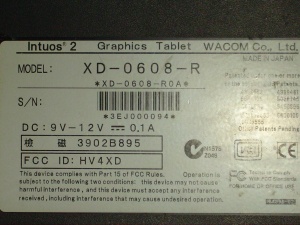 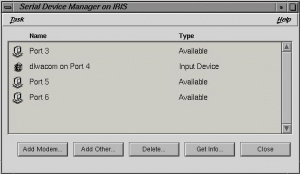 Wacom tablets use a patented electromagnetic resonance technology. Since the tablet provides power to the pen through resonant coupling, no battery or cord is required for the pointing device. As a result, there are no batteries inside the pen (or the accompanying puck). This allows for more slender pens, and gives the pen-and-tablet combination a long and essentially maintenance free lifespan. However the battery-less technology makes the tablet bigger and heavier than other technologies.

Under the tablet's surface (or LCD in the case of the Cintiq) is a printed circuit board with a grid of multiple send/receive coils and a magnetic reflector attached behind the grid array. In send mode, the tablet generates a close-coupled electromagnetic field (also known as a B-field) at a frequency of 531khz. This close-coupled field stimulates oscillation in the pen's coil/capacitor LC circuit when brought into range of the B-field. Any excess resonant electromagnetic energy is reflected back to the tablet. In receive mode, the energy of the resonant circuit’s oscillations in the pen is detected by the tablet's grid. This information is analyzed by the computer to determine the pen's position, by interpolation and Fourier analysis of the signal intensity. In addition, the pen communicates other vital information, such as pen tip pressure, side-switch status, tip vs. eraser orientation, and the ID number of the tool (to differentiate between different pens. mice, etc.). For example, applying more or less pressure to the tip of the pen changes the value of the pen's timing circuit capacitor. This signal change can be communicated in an analog or digital method. An analog implementation would modulate the phase angle of the resonant frequency, and a digital method is communicated to a modulator which distributes the information digitally to the tablet. The tablet forwards this and other relevant tool information in packets, up to 200 times per second, to the computer.

Model shown to the right is a serial port Intuos2 connected to an SGI Tezro workstation.

You need eoe.sw.optinput on the IRIX overlay's installed to use it and note that this doesn't enable your intuos 2 tablets, you'll need a separate driver for that... Also the serial device manager needs to know you're using a wacom on a serial port.

Files on the Tezro

Config outside of Discreet Apps tutorial

(Lifted from a dead page using the wayback machine)

Everyone who ever worked with a Wacom tablet knows how much their tablets rock - for many taks, especially for image manipulation and painting. However, to get one of these up and running, you'll need... you guessed it, a driver. Now, we don't expect Wacom to be a bunch of pot smoking communists, but asking $150 for an extra UNIX driver CD per machine just to make the product actually functional... it's too tempting to cut just the "communists" out of this. Enough ranting, if you have an older Wacom tablet (not an Intuos or Graphire... the following does *not* work on them) now for the good news: you don't need their driver CD! Here's how it works:

First of all, you'll need the IRIX 6.5 Foundation 1 CD [note: I'm pretty sure the needed package is on the IRIX 6.2 & 5.3 CD also, but I don't have a machine with 6.2 or 5.3 here at the moment, so I can't check. If you know more about this, please drop me a note]. Open the Software Manager (# swmgr &), or just doubleclick the CD icon on the desktop after you inserted the CD and swmgr will come up automatically. Be sure to have everything unchecked at first ("Selected/Unmark all"), and then search for the package eoe.sw.optinput (or "optional input devices" if you have long names on in swmgr). Surprisingly, you'll find it as a subset of eoe.sw. If you have anything else than plain vanilla IRIX 6.5 (hopefully! If answer=yes, go grab a recent set of overlays on support.sgi.com first and bring your OS up to date), also open the first overlay CD, depening on the OS level you're on. For me, it's the first CD of 6.5.17m. Then mark eoe.sw.optinput for install. Should look like this (click for full resolution image) - and no, don't ask me why my swmgr shows a net change of -324k, I have no clue:

After you installed the driver, you'll need to reboot your machine. Next step is to configure the serial port you have the tablet connected to (I strongly suggest serial port 2, because 1 is where you connect a terminal to your machine). Open the serial device manager to configure the port in case this hasn't been done automatically after the reboot. You'll find the serial device manager through the system manager, which is hidden in toolchest under "System/System Manager" and looks like this:

Next, look under /usr/lib/X11/input/config for a file named "wacom" - it likely doesn't exist yet. If it's there, open it and compare it to the content below, if not, fire up your favourite editor and create it. In either case, it should look like this:

You may need to reboot your machine again, I don't know, my port was already configured after the reboot but this can also be because of an older Wacom driver installation. It doesn't hurt in any case.

Upon the next startup, you should have a working Wacom tablet under IRIX!

Now for the fun part: we want the Wacom control panel to work also, don't we? No problem, just download it from ftp://ftp.wacom.com/pub/drivers/sgi. For my ArtPad II, I downloaded the Wacom_SGI_4.7.2.tar.gz file, which is actually the whole driver kit... which would ask for a license if you install it completely. As we don't need their stinky driver any more, all we want is the control panel, right? So download the file, gunzip & untar it and fire up swmgr manually, point it to the SGI/dist directory and only install the control panel. Don't bother installing the help files, they're password protected PDFs... not that this too much of a problem, but we want stay 100% legal, don't we?

You can also download just the control panel alone, but this way we have a nice, clean install via swmgr. However, some people reported having trouble with the complete tardist, so if you end up without a working control panel, use the control panel only .tar file from ftp.wacom.com (wacomcp3-3.tar currently), untar the file and follow the instructions in the readme file, it's easy. After successful installtion, run /usr/sbin/wacom and voilà! There you have your control panel for free:

It's probably a good idea to grab the /usr/sbin/wacom file in the filemanager and drag it into the IRIX icon catalog. Put it into "ControlPanels" and it's just a click or two away any time you need it. Too sad it's doesn't allow me to use the eraser on my ArtPad II pen, but this didn't work with the original Wacom UNIX-Kit either.