The Woods Hole Oceanographic Institution (WHOI) recently teamed with Apple in an effort to support the ongoing exploration of deep-sea-floor research programs and deep submergence facilities which are provided to the academic oceanographic community. Apple Power Macintosh 8500 computers and peripherals, along with third-party software applications by Adobe Systems, Claris Corporation, and SAS Institute, were key ingredients to support WHOI's upcoming deep-ocean endeavors.

Woods Hole Oceanographic Institution has operated the U.S. National Facility for Deep Submergence for the past 30 years. The new class of Auxiliary General Purpose Oceanographic Research Vessels (AGOR), the R/V Atlantis, built by the U.S. Navy and operated by WHOI, is being modified to accommodate the launch and recovery of deep submergence vehicles. The submersible Alvin, ROV Jason, Argo-II optical and acoustic mapping system, and the DSL-120 kHz towed sonar system, are the vehicles that comprise the National Deep Submergence Facility. Over the past three decades, Alvin has been the primary vehicle used by scientists to study the fundamental biological, chemical, and geological processes that have both shaped our planet and influenced the physical and chemical properties of the world's ocean and its biota content. Alvin can carry three people to depths as great as 4500 m for periods of approximately 8-10 hours per day. 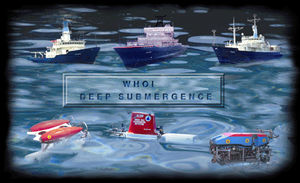 The main research to be conducted by WHOI investigators will focus on mapping and analysis of sea-floor volcanic terrain on the East Pacific Rise and Mid-Atlantic Ridge (two segments of the global Mid-Ocean Ridge system where the crust of the Earth is created). An important facet of the research is the time-series study of hydrothermal vents and the biological communities and vent animals that develop around the vents, which are based on chemosynthetic processes to support life. Part of the vent research involves using Apple PowerBook 170 computers to control vent fluid temperature sampling/monitoring equipment either from Alvin or in the control van of the ROV Jason. "The real-time ability to monitor vent fluid temperature using the newly developed WHOI inductively-coupled link temperature probes connected to a PowerBook is an elegant and reliable way to get this critical data," said Dan Fornari, WHOI's Chief Scientist for Deep Submergence and one of the researchers involved.

The Apple computers and software that will be on R/V Atlantis will enable scientists from many universities and colleges internationally to analyze and visualize their data during a cruise. On-board computing is often a key to maximizing the productivity of an expedition and taking advantage of real-time analysis to focus on field investigations. Fornari said, "Having the capability to process large data sets, display 3D graphical representations of the sea-floor, and output large data files both on shore at WHOI and at sea on the R/V Atlantis will contribute significantly to the scientific productivity of WHOI scientists and other researchers who will use the National Facility for Deep Submergence." Apple equipment will support projects that include mapping and analysis of large multibeam bathymetric datasets on ridge crests, transform faults, and continental margins; time-series analysis of volcanic and hydrothermal processes at ridge crests; and development of educational materials for K-12, undergraduate, and graduate studies in oceanography and deep-ocean technology.