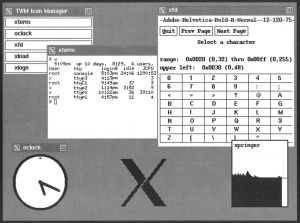 Both X11 and MacX allow users to take advantage of the highly portable, network-transparent X Window System. The X Window System is the result of years of development work by researchers from the computer industry and from the Massachusetts Institute of Technology (MIT). Apple Computer's X Window System for A/UX complies with the standards and conventions set by the MIT X Consortium.