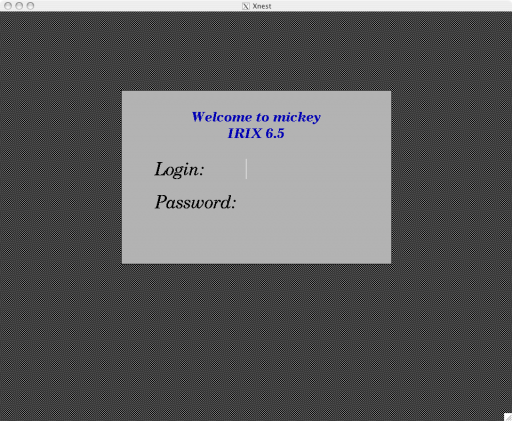 When you connect over the network it displays a login screen for XDMCP type programs like Xnest.

If you have problems connecting to an XDM session try turning all the firewalls off. Then turn the firewalls back on a create whatever rules are needed.

I've been attempting to set up xscreensaver on my Octane. I'm trying to follow the example in the xscreensaver man page to launch it at the XDM login screen (when nobody is logged in). The man page says to modify the Xsetup file and this is where I'm encountering problems.

I've modified xdm-config to contain entries for Xsetup / Xsetup-remote modeled after those for Xstartup / Xstartup-remote. I've created the Xsetup script and marked it as executable. I've restarted XDM a number of times and the whole machine once (just in case).

The DisplayManager*grabServer resource in xdm-config must be set to False in order for xdm to even attempt to execute Xsetup. This value is set to True in the default xdm-config. After making this change I'm seeing Xsetup executed as expected when the login screen comes up.

Here is the patch to support XScreenSaver 5.10 at the XDM/clogin screen: Attachment:

Caveats This seems to work OK on my system using the flurry GL hack (Octane/MXE). Please note that I have not tested XScreenSaver 5.10 thoroughly on my system so there could be bugs or other issues that have crept in either with this patch or the new version of XScreenSaver.

To install WARNING: This will copy the binaries, etc. into various directories on your system. Because this is not yet a tardist you will need to manually track down and remove anything that was installed if you want to uninstall this patched version of XScreenSaver from your system. TODO: Create a tardist for this patched version of XScreenSaver to enable easy install/uninstall. Ensure you have uninstalled any other versions of XScreenSaver. gmake install (need to do this as root). Make sure the setuid bit is set on the xscreensaver binary.

Create the /var/X11/xdm/Xsetup shell script. This script should kill off any user instances of xscreensaver and relaunch it as root for the login screen (note that xscreensaver will setuid itself to nobody in this case), e.g.: Code:

I think that's it. Please let me know how this goes if you try it out.