Difference between revisions of "NeXTSTEP" 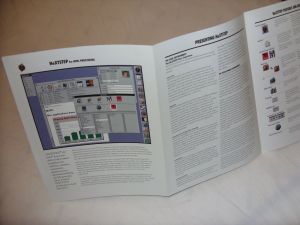 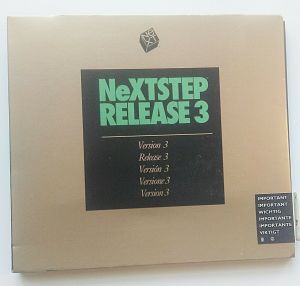 May also be written as NeXTStep or NEXTSTEP. This is an operating system from NeXT originally designed for their m68k hardware.

You need to interrupt the bootloader when the machine is turned on so you see a "boot:" prompt or something similar depending on the type of computer. Type "-s" without the quotes and hit enter. If this is NeXT hardware, type "bsd -s" without the quotes. When the system drops you into a single mode root shell, type "sh /etc/rc &" to start the normal services. Now do "passwd root" and enter your new password. Reboot the system.

Create /etc/resolv.conf and add your desired nameserver, so something like "nameserver 8.8.8.8" and save the file. Go to NextAdmin directory and open HostManager.app, click Local in the menu, use local domain only and readable, set your desired IP/router/netmask info and reboot.

Zip Drives and NeXT

The ZIP drive can do everything a normal drive can do: You can use the drive as a normal external removable disk drive. And for the adventurous, you can even build a bootable version of NEXTSTEP on a single ZIP disk and _boot_ from it! Yep, this ZIP drive'll even work with YOUR NeXT. They can be connected to just about any hardware running NEXTSTEP. This includes NeXT hardware, Intel-based hardware, Suns, Hewlett Packard machines, even the NeXT You Own. And forget about disktab and fstab entries - you won't need to add one!

Hooks right into your current SCSI bus, just like real hardware. ZIP drives have a pair of SCSI-1 interface ports. The ports on the rear of the unit are DB25F Macintosh-style SCSI connectors. To connect to your SCSI chain, you'll need either a DB-25 to Mini SCSI-II external cable (p/n DCA 2200, $25 from Mac Warehouse), or a standard Mac to Centronics external cable. You may set the ZIP drive to SCSI target id 5 or 6 only. Yes, you read that right - only 5 or 6. The selector switch on the back of the unit has only 2 positions; it's not a rotary or thumbwheel switch, so you have only these choices.

Yet, it does have a nice feature - external switchable termination! (given that you might otherwise need a Macintosh SCSI terminator). Would that all drive cases offered this.

Building NeXTSTEP on a Zip Disk

The easiest way to build a bootable version of NEXTSTEP on a ZIP disk is to use BuildDisk.app in /NextAdmin. You can, of course, "roll your own." But check your state and local laws first.

Look for the "Hard Disk" moniker. The ZIP drive will show up as "Hard Disk." (You'll know you've selected the correct drive when BuildDisk shows "Removable disk, 96 MB".) Be careful. Screw this up and you'll be kissing some other unsuspecting drive good-bye.

Install other software, but wisely! Be VERY careful when choosing extension packages to install! By default, you'll have only about 30MB free on the ZIP disk (so don't even _think_ about installing NEXTSTEP Developer! Or Webster). Seriously think about adding sdformat, SCSIInquirer, and maybe even ppp to the disk's contents. Chances are, you'll be booting standalone for some ungodly reason, and these are good friends to have with you in your time of need.

Build the disk. Click the "Build" button. The build takes about 1/2 hour. Longer if it's your first time.

Booting NeXTSTEP from a Zip Disk

How to recover from an partially formatted disk

How to use a tape drive

You'll find this file under the path name /usr/include/bsd/sys/signal.h. The problem is that Makefile contains an incorrect absolution path name to signal.h (line 36):

Change it to read:

and then say "make".