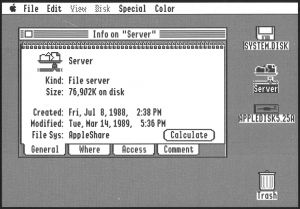 The Apple IIGS System Software Version 5.0 gives you all the ad­vantages of the latest system software for the Apple IIgs personal computer. It features GS/OS, an operating system that improves the startup time and speeds up disk access, program launching, and file copy and transfer tasks.

The Apple IIGS System Software Version 5.0 also offers several features that significantly improve the computer's func­tionality and ease of use.

The Finder (a graphics-based interface that allows you to mani­pulate files on the desktop) is now easier to use, faster, and more informative than earlier versions. It has also been revised to allow access to the AppleTalk Network System, so you can share programs and data located on an AppleShare file server, as well as networked printers, with other AppleShare users.

Another important feature is the new graphics-based Control Panel, which you access from the Finder via the Apple menu. You can use the Control Panel to set the time and date, raise or lower the sound volume, log on to network servers, configure slot assignments, and even change screen borders or background and text colors.

Version 5.0 includes the Advanced Disk Utility, which features an easy-to-use, graphics-­based interface and allows you to initialize, erase, and partition hard disks, as well as both 5.25- and 3.5-inch floppy disks. You also get the Installer utility, which lets you update your startup disks and customize their configuration for your system and its attached peripherals.