Difference between revisions of "Apple Rhapsody" 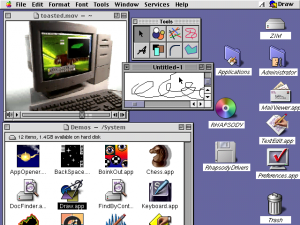 Rhapsody is the code name given to the project to port OPENSTEP/NeXTSTEP to the Macintosh PowerPC platform. The first developer releases of Rhapsody also supported x86 before being dropped prior to Rhapsody being shipped as Mac OS X Server.

Mach, the kernel at the core of the Rhapsody OS, was designed by researchers at Carnegie Mellon University (CMU). Mach is a simple communication-oriented kernel, and is designed to support distributed and parallel computation while still providing BSD 4.4 compatibility. The Rhapsody version of the Mach kernel is a port of CMU Release 2.0, with additional features both from Apple and from later versions of CMU Mach. Apple-only features include the Bootstrap Server and loadable kernel servers. Features from CMU Release 2.5 and beyond include scheduling and some details of messaging.

Which computer systems are supported by the Rhapsody Developer Release for Power Macintosh?

The systems which are officially supported, include Power Macintosh:

Macintosh fans are reading confusing messages about Apple Computer's [ASDAQ: AAPL Rhapsody operating system (OS), as a recent report suggests the once highly touted OS is now dead. Last month, Rhapsody was identified as the core technology for Apple's next Macintosh OS, Mac OS X (ten), as well as a possible server OS. But Apple's evolving OS plans do not include an extended future for Rhapsody.

"It's a good headline, but it is not really an accurate picture," said Apple spokesperson Russell Brady, in responding to the "death" of Rhapsody.

A MacWeek article claimed "Rhapsody as a strategy is dead. But the technology lives on." Citing Ken Bereskin, Apple's director of OS technologies, the report claims Apple has changed its OS strategy in relation to Rhapsody.

"It is pretty clear coming out of WWDC (World Wide Developer Conference) that Rhapsody isn't a strategy anymore," said Bereskin. "As a strategy, it was incomplete -- it wasn't what the Mac OS development community wanted -- so we've changed the strategy." Although the strategy is changing, Brady said the rush to bury Rhapsody is a bit premature. Accordingly, he said Apple will release Rhapsody 1.0 sometime this fall. "I think it will be used primarily by developers and high-end users who want to get a feel for Mac OS X," he added.

"Rhapsody can be looked at as a parent for Mac OS X," continued Brady. "We are still developing Rhapsody and continue to develop the technologies it provides."

More than 10,000 Macintosh developers already have a "developers release" of Rhapsody.

A farewell to Rhapsody may be premature, but in terms of an evolving product, the OS will not be part of Apple's long-term plans. Even Brady said, "There are no plans to bring Rhapsody forward after version 1.0."

In the MacWeek report, Bereskin endorsed Rhapsody 1.0 as a server platform for publishing applications. "As a product, Rhapsody doesn't represent the features, the technologies and the user experience that Mac OS X does, so it is not going to be pushed for any level of desktop deployment," Bereskin said. "But as a server, especially in Apple's core markets, it brings value."

Until recently, Apple indicated the company would pursue a parallel OS strategy with the Mac OS for desktops and Rhapsody as a server operating system. Now with a strategy which does not include future versions of Rhapsody, Apple is not going to make Rhapsody the foundation for a new OS server platform.

However, Apple could develop Mac OS X as a desktop OS and a server OS. "We are not saying Mac OS X will be a server OS," claimed Brady, "but it will include the functionality to operate as a server OS."

Hartsook said he did not see value in Apple's plans to make Rhapsody a sever OS. "That's never been clear to me exactly what that means," he added. "Yes, it (Rhapsody) has memory protection and pre-emptive multitasking and all the things you need for a server, but a server is more than just a relabeled desktop operating system."

"There are people who would buy Rhapsody as a server," Hartsook said, "but it will not be a cash cow. What hardware are you going to run it on? Well, the only thing it will run on is going to be Macintosh systems and Apple's not really building server systems at this time. It's building desktops."

Rhapsody is based on technology Apple received when the company acquired Steve Jobs' Next Software. Originally designed to serve large enterprises, the OS under Apple became the source for a complicated OS development which would apply to Power Macintosh computers and Intel- based computers.

The version of Rhapsody for Power Macintoshes was code-named the "Blue Box," and "Yellow Box" was a code-name for Rhapsody development on Windows NT, Windows 95 and eventually Mac OS platforms.

The issue of Apple developing Rhapsody or Mac OS X for Intel-based machines is no longer a likelihood. "Producing an operating system for Intel processors is not a short-term priority," Bereskin said, "From an exceptionally high level, processor independence and flexibility is always a good thing. But there are no specific product plans at all."

In summary, the Apple OS roadmap now looks as follows: Rhapsody 1.0 this fall, a couple of Mac OS 8.x upgrades after that, then Mac OS X sometime late in 1999. After that, Rhapsody is history.