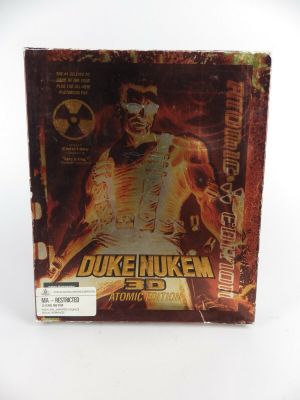 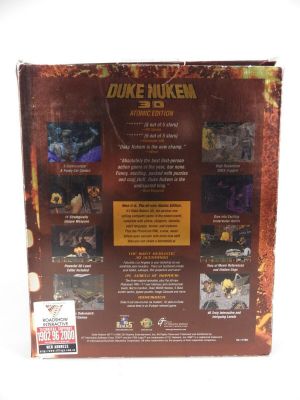 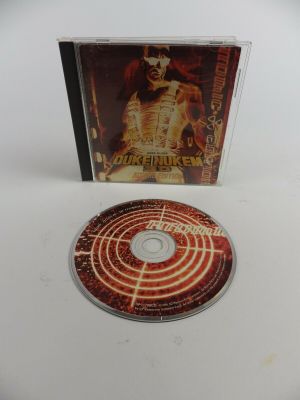 The third chapter in the series, and the first with a 3D perspective (the original Duke Nukem and the sequel, Duke Nukem II, are side scrolling platform games). This game, set sometime in the early 21st century, begins in a ravaged LA, which was overtaken by aliens while you were abducted during Duke Nukem II. Duke, upon returning to Earth, finds himself with another mess to clean up, and another alien race that needs exterminating. Duke is a can-do hero who realizes that sometimes innocent people have to die in order to save Earth, so accuracy of gun fire is not a real concern to him. :) This game has a long list of cool things that haven't been attempted in 3D action games, yet. The weapons, for example, kick-butt: There's a mine that can be placed on any wall and sends out a laser trip beam-- perfect for multiplayer games. There's also a shrinker ray that reduces an opponent to the size of a G.I. Joe, at which point they are foot fodder--watch them splat! As in Shadow Warrior, you can swim under water, and even shoot players who are standing outside the water, or vice versa.

When I first heard of Duke Nukem 3D my first reaction was that it was yet another more or less feeble attempt to reach the level of Doom and Doom II. The opinion stuck for a couple of runs on the shareware version but it didn't take long until I realized that this was the game that was going to continue where Doom (and to some extent Heretic) ended.

The first and most obvious feature of Duke Nukem 3D is the level of detail but as you get more and more accustomed to it there are extra thrills in the third dimension (which was sort of lacking in the Doom games but present in other more recent games - although in that case feeling altogether wrong) and the enhanced graphic modes enabling you to see things more or less clearly at a distance. Apart from the aliens blowing up in a realistic way you can also blast parts of structures or much of the decorations, windos and such. It is a special feeling to have a devastating impact on a scenario...

In higher levels of difficulty the aliens don't only die more realistically, they may also seem to die and lie in a pool of blood for a while to give you a big surprise later on. This is not totally at random though, I suspect that there is some control on how much damage an alien has suffered and if that reaches some critical low the alien falls to his knees, wiggles his head a bit and finally keels over. All just to resurrect a few moments later.

Many that have seen or played the game are probably amazed about the amount of sex the game features. A few years ago (when I was still in the business of reviewing computer games) you could have gotten hanged for releasing a game with a voluptuous babe on the cover. I suppose 3D Realms avoided that by putting it in the game - where the lynch-mob couldn't see it. For concerned parents (IMHO all parents sticking this game in their childrens hands) Duke Nukem 3D features the ability to turn the sexist stuff off. I tried it once but for an adult (as I consider myself being) the game lost a dimension so I hurried to turn it on again - Shake it baby!

As for the violence I don't think that it affects the behaviour of any normal person in the real world. You soon realize that what is possible in the game simply can't be done in reality. (I've tried, but nothing in the available arsenal made the disturbing fiancee go away. Go figure.)

Apart from the obvious violence the game also contains a lot of humor and stuff that hasn't really got anything to do with anything. I'm pretty sure that all my friends who have played it have burst out in laugter at least once. One of the finer examples of totally superflous stuff is the famous pool table in the second level. You can shoot the balls, push them around and sink them in the pockets but it doesn't lead to anything. There is also a great deal of detail in the game. The scenario contains objects whos only functionality is to make the game more realistic, which they do. An example of the level of detail is a telephone number scribbled on a wall in the very first level - you can't see it unless you're very, very close. (Don't run off trying to find it, I've already tried it - there's no answer...)

Throughout the game Duke Nukem shares his thought with the player. Most oftenly his point of view is pretty mediocre but sometimes he says things that Clint Eastwood would get jelous of. When things are going really great (lots of monsters blasted) Duke can comment the action with the very fitting "Let God sort them out!". At times he also seems to take interest in what is done to the monsters - "What a mess!". These comments from Duke Nukem are generally not of higher value but when they really match the situation they boost the fun tremendously.

Apart from being an excellent game from a single players perspective Duke Nukem 3D can also be played by up yo a maximum of 8 players at the same time. There are two types of multi player games; Cooperative and Dukematch. Experienced Doom players may note the reseblance to Deathmatch. For persons not familiar with the terms Dukematch and Deathmatch are combat games where the objective is to obliterate the other players as many times as possible. In cooperative mode the aim is to shoot away at the monsters instead of your fellow players. It isn't really until you get into multi player gaming that Duke Nukem 3D really shows how much it requires from your computer. The minimum requirement is a 486 with 8 Mb of RAM and a VGA card but that most certainly will not allow you to play multi player games to any greater extent. Our home-LAN featuring a P60 with 24Mb RAM and an ATI Mach 64 PCI card, a Compaq Deskpro 4/66i with 16Mb RAM and a simple Cirrus Logic VGA card and a 66 Mhz 486 with 16 Mb RAM and a VESA SVGA card can't keep gameplay up for more than five minutes. I figure the odds would be better if the machines were more equal to each other but even the two 486's don't last that long in a two player game. This, I think, is the only negative thing I've found about Duke Nukem 3D. Compared to Doom (I & II) which runs splendidly on the setup we've got Duke Nukem 3D does a really poor job.. Setting up Duke Nukem 3D in a LAN may not be a very wise thing to do if your neighbours are overconcerned about what is going on around them:

-Hey, look! If you step in the blood you make footprints!

In a sence Duke Nukem 3D is a very adult game with all the sex and violence it features. Altough you as a parent can turn the sex stuff off and reduce the gore I still don't think its something one should put a 5-year old kid infront of. Better let their senses be dulled by television programs which in most cases disguise the sex and violence as news or documentary information.

It may sound as if there's no end to the joy of Duke Nukem 3D but sadly there is, especially if you haven't got any friends to play with via modem, null-modem or LAN (which is by far the best). Once you've done all the levels single handedly (using the save-game feature, ofcourse) a few times you will most likely loose interest in it. If playing with friends (the more the merrier) it will take longer before the game wears out. Also, many will argue that the myriad of user-created maps that are appearing adds more life to the game but I doubt that there are or will be that many maps that are fun for a single player. Furthermore, the shear effort of finding a map that is good (there's tons of more or less lame maps out there) will probably make many loose interest very quickly. Agile players may create their own maps using the map editor that comes with the game. The documentation available to people not on the net is questionable. If you want to start creating your own maps you'd be best off with the documentation on the CD and some good guide. (Such as the blablabla...).

Enough said, Duke Nukem 3D is a must-have for any serious gamer. Buy it, don't copy it. If 3D Realms make a bundle on this some other publisher will probably think that the effort of making an even better game is profitable.