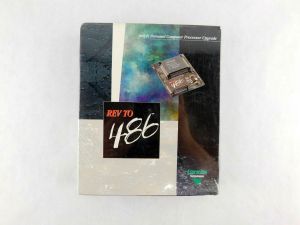 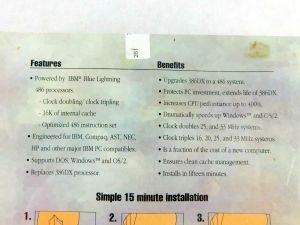 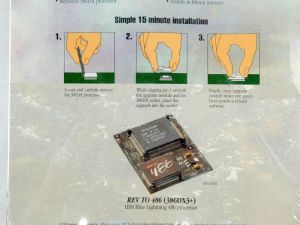 The Rev to 486 CPU upgrade kit from Evergreen Technologies provides one of three variants of IBM 486SL chips in clock doubled or clock tripled configurations that can press-fit over an SMD 386SX or into a QFP 386 socket.

The Rev to 486 CPU upgrade is a QFP "snap-in/on" upgrade for 386SX based computers. The more traditional method is to pull the 386SX out of the processor socket and snap in the upgrade but another common method of attachment to the CPU was to stick it on top of a QFP "Surface Mounted" (hard-wired) 386SX CPU.

Even with that done the chip does not merely take over the computer, it requires a driver to be loaded at boot-time for the 486 chip to even be active. This driver came originally on a 720K Diskette that came with the upgrade, but also can be found online as revto486.exe (you can write you own disk to a 1.44M formatted to 720K if needed be). The disk will then add a Device statement to Config.sys that will enable the CPU and disable the 386SX CPU in the process.

The CPU's used were IBM's "Blue Lightning" chips, which included clock doubled and clock tripled configurations. Granted the values below may not all have been made but were included for completeness.

The performance increases of these chips were marginal at worst, and amazing at best, the latter surely being true for the later BLX3 variants with a 16K internal cache, performing roughly on par with a 486 DX-50 or DX2 in certain situations. Still, these chips had no internal math co-processor, and required you to install a 387 for that capability.

A nice detail few talk about is the ability to use one of these upgrades in tandem with the original 386SX to allow for a vintage system to act as at least two, if not (in combination with a Turbo switch) a multitude of different systems in one package by using a multi-boot-config in DOS to load or not load the driver.