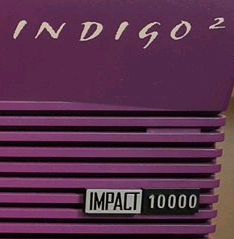 IMPACT (sometimes spelled Impact) is a computer graphics architecture for Silicon Graphics computer workstations. IMPACT Graphics was developed in 1995 and was available as a high-end graphics option on workstations released during the mid-1990s. IMPACT graphics gives the workstation real-time 2D and 3D graphics rendering capability similar to that of even high-end PCs made well after IMPACT's introduction. IMPACT graphics systems consist of either one or two Geometry Engines and one or two Raster Engines in various configurations. IMPACT systems that included texture RAM (TRAM), such as the High Impact and Maximum Impact, also supported hardware-accelerated 3D texture mapping.

The three SGI Indigo2 IMPACT options, from least to most powerful, are:

I have found that the best way to test any Impact with TRAM is with blender. Download it, install it, and test out some of the demos.

I would get High and MaxImpact boardsets that would pass IDE just fine, but would fail in blender at the customer site. That is when I started testing with blender.

Another test is to leave a spinning textured demo automatically rotating for more than 10 minutes (the tex_cube is a good candidate, as well as reflection mapping demos), and see if the Xserver crashes or not.

I wonder if somebody knows certain facts about these (seemingly famous) Xserver crashes from CFIFO timeouts in some IMPACT boards which appear to run fine (pass all diagnostics, textured demos run OK, etc...) It seems to work OK, but you leave an animated textured demo for some minutes, and you'll see the login screen.

Been there, seen that. I am sorry to say but your HI graphics set is about to die. This is a typical symptom of Trams getting loose, the worst of all is the fact that this is quite likely to be the connection between memory chips and mainboard itself.

I lost 2 HI sets in my I2 in that way and I do know the reason: Power On - Off cycles are deadly for TRAMS because those sets tend to get very hot and thus cool-hot-cool-hot cycles take their toll.

When my first set died several years ago I took a time to resolder each and every leg of tram chips, it was hell of a job but did solve the problem.. for a short time...

Solution: For now, try to turn on your machine, leave it on for 2-3 hours and reboot, quite often the screen comes up okay but quite soon you will not be able to do that ether and will need to look for another gfx set.

No other part of my I2 ever failed but TRAMS are really sensitive, as I cannot leave my machine on all the time I finally given up on any gfx with trams and bought myself several SI sets and I am still on the first one, they are very robust :)

If you do need TRAMS, make sure you leave your machine on all the time.