Difference between revisions of "IRIX" 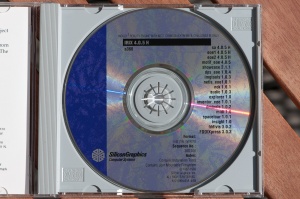 IRIX is a System V-based Unix computer operating system with BSD extensions developed by Silicon Graphics (SGI) to run natively on their 32- and 64-bit MIPS architecture workstations and servers.

As a result of its Unix underpinnings, it is capable of extremely long uptimes and its XFS file system is regarded as one of the most advanced journaling file systems in the industry.

IRIX has particularly strong support for 3D graphics, video, and high-bandwidth bulk data transfer. IRIX was one of the first Unix flavors to feature a graphical user interface for the main desktop environment and was widely used in the computer animation industry and for scientific visualization due to its extremely good performance with 3D graphics. IRIX uses the IRIX Interactive Desktop, which by default uses the 4Dwm window manager with a custom look designed using the Motif widget toolkit.

The current major version of IRIX is IRIX 6.5 which was released in May 1998. New minor versions were released every quarter up through version 6.5.30. Until version 6.5.22 there were two branches of each release: a maintenance release that included only fixes to the original IRIX 6.5 code and a feature release that included improvements and enhancements. Historically, the maintenance releases were a free download while the feature stream required a support contract. Selected versions up through the 6.5.22 maintenance release are currently available for free download while version 6.5.23 and higher require an active Silicon Graphics support contract, despite only running on Silicon Graphics hardware.