Difference between revisions of "Junkbox BBS" 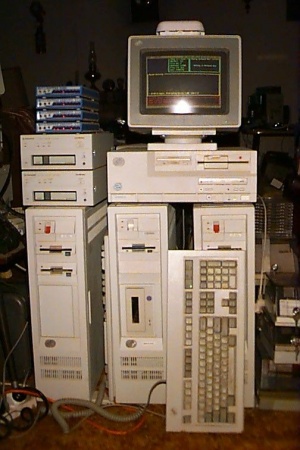 The original objective of the Junkbox BBS was to construct a Public Access BBS from compu-junk that was considered to be obsolete and of no value to general industry. Surely this equipment could be put to a good use!

The Junkbox BBS uses genuine IBM computer equipment online. This is one way to stay 100% IBM compatible. The sysops have found that genuine IBM equipment regardless of it's age, offers reasonable levels of reliability.

When you dial up the BBS, you could connect to one of the following units:

Maximus is a flexible bulletin board system (BBS) for the DOS, OS/2, Windows NT and Windows 95 operating systems. Maximus allows remote users to connect to the system by modem, read and write messages, participate in public conference areas, send and receive files, and much more. The software is well supported and is Y2K compatible, many utilities for Maximus can still be obtained throughout the worldwide web.

History of the Junkbox BBS

Back in 1995, after years of using other peoples BBS's. The Junkbox BBS sysops decided to set-up a system using salvaged computer junk. The system in the above photograph was on-line in 1995/96, using RBBS-PC and Telix Hostplus BBS software.

HOST+ was very popular with users but the product never realised its full potential which should have been fidonet echomail support. Support for Host+ was also very poor, it appeared that Deltacomm had abandoned the product.

The "old faithful" IBM XTs were eventually retired. For a short period of time we also ran a UNISYS Personal Workstation Series 300 machine (ex Telstra Australia). This was an 8/10Mhz 286 machine with a 20 meg HD and 1.2meg floppy drive.

In 1998, we replaced the IBM PC-XTs with IBM PS/2 model 80s, basically to gain some speed and hard drive storage space. The old IBM PC-AT 5170 was upgraded to a 386SX motherboard and received a 150 meg Maxtor MFM drive salvaged from a Telstra telephone exchange. This unit proved very reliable, and was replaced in 2000 with a Wangaratta (Australian) made IBM PS/V 486.

The Australian assembled IBM PS/V had a chinese made 486SX motherboard, in the first six months of using this machine we had a motherboard failure, a power supply failure and a hard drive failure. Eventually in 2002, thermal (flexing) problems in the replacement motherboard forced us to replace the machine completely.

We chose an IBM PS/Valuepoint 6384 as the replacement, these machines were in common usage in throughout the private sector and government departments in Western Australia. Ours had been actually been scrapped by Western Power. The motherboard in this machine was a 486SX soldered on the motherboard and a second ZIF CPU socket, we filled this with a blue Intel 486 DX2-66 CPU and put some decent simms and a 500 meg IBM HD in the machine.

We had some problems with modems on the BBS as well. Some modems cannot handle working 24 hours 7 days a week. We tried a 56K metal case Lightfax modem but unlike it's slower Lightfax cousins it failed after one month. When tested on the workbench we found it had problems on one of the 5 volt rails, we replaced a LM7905 voltage regulator and looked suspiciously at the quality of electrolytic capacitors in the unit. We contacted Lightfax for advice, they told us to send it to a service agent in Sydney, a mere 2000 miles away from us in Perth. Fat chance of that! Eventually the 56K Lightfax modem found it's way into the rubbish bin after bouncing off a brick wall or two.

The machine was replaced, not because of failure, but because it ran out of hard-drive space. The model 6482 has a better drive table.

It was also about that time I discovered that IBM had killed all it's Valuepoint support links on the web. Don't waste your time Googling for them, they are gone!

We we were unable to find a file to flash the bios to accept a larger drive. We also swapped to Caldera DR-DOS as IBM PC-DOS 7:00 could not see the larger drive properly.