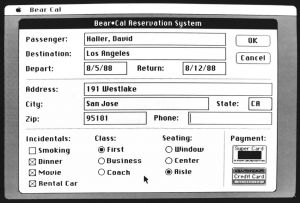 MacWorkStation is a collection of high-level Toolbox routines that allow host programs running over any supported communications protocol to utilize the standard user-interface, file-management, and printing features of the Apple Macintosh personal computer. It gives programmers full access to and control over windows, pull­down menus, dialog boxes, and other features of the Macintosh user interface-without requiring them to learn the details of a tradi­tional Macintosh programming environment.

This combination of features allows corporate MIS departments, software developers, value-added resellers, and systems integrators to enhance their existing host­-based applications, and to use their existing programming staffs to create applications with the characteristics of the Macintosh interface.

These act as a high-level toolbox that interprets commands from the host to build and maintain a Macintosh interface. Directors use the underlying Macintosh Toolbox managers to support a consistent environment between host and local applications. These Directors include Alert, Dialog, Graphics, Window, Cursor, Menu, List, and File. Additional Directors can be added.

These constitute a Macintosh code resource that can be created from any high-level Macintosh programming language and added to the MacWorkStation application or document file. One or more Exec Modules can be launched locally (or by the host) and may perform any programming task. These Exec Modules run simultaneously and can trap events or interact with the host or user while MacWorkStation is running. This provides a very powerful way of extending and customizing MacWorkStation to fit a wide range of cooperative processing needs. Exec Modules also have the capability of using MacWorkStation commands to perform any user-interface, printing, or file-management functions. This reduces the amount of knowledge that even an Exec Module programmer needs in order to perform Macintosh programming.

This is a powerful scripting language built specifically to help access remote applications. The CCL script can be lengthy and complex or it can be very short, depending on how the user is accessing the remote application. Once the host application is reached, the CCL script transfers control of the session to the appropriate Communications Module.

These are Macintosh code segments that may be written and added to MacWorkStation. They are responsible for ensuring that MacWorkStation functions entirely independently, without regard to the type of network the communication with the host application is taking place on. This allows MacWorkStation to work over a wide range of communications protocols. 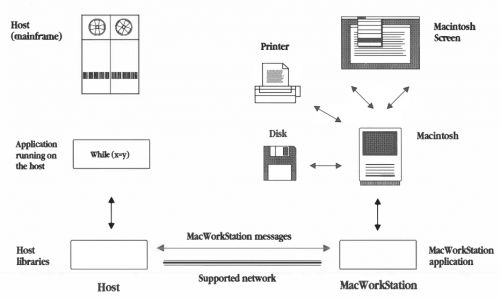 Utilizing MacWorkStation to develop a Macintosh interface on a host application requires that the host software be mod­ified. This modification can take one of two forms. If the application has been written with a separate module to manage the terminal or user-interface interaction, then a Macintosh inter­face module can be written to manage the interaction between the host application and Mac­WorkStation. If the application has been written to include the terminal-handling function as an integral part, then the applica­tion must be modified directly to support MacWorkStation.

In a typical application, MacWorkStation could be used as a front-end for the following: