Difference between revisions of "Macintosh IIx" 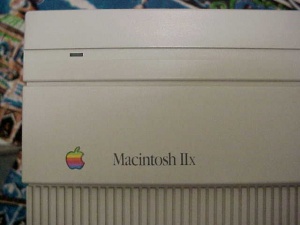 Six NuBus expansion slots. NuBus provides a multiplexed 32-bit address bus and data bus on a single 96-pin connector. NuBus is self-configuring: Cards can be plugged into any slot and the system will automatically identify and configure each card, without any DIP switches or jumper wires. The NuBus architecture supports data transfer rates of up to 37.5 megabytes per second.

The Macintosh IIx is ideal for people who require maximum expandability, disk storage capacity, and the flexibility of a modular Macintosh personal computer system. The performance of the Macin­tosh IIx results primarily from its advanced 68030 microprocessor. And to accelerate the processing of complex math functions, the Macintosh IIx comes standard with a 68882 coprocessor.

To meet the demands of the growing number of powerful Macintosh applications available today, the memory of the Macin­tosh IIx can be expanded incre­mentally to 8 megabytes of RAM. And virtually any type of Macin­tosh IIx configuration can be created, because the system in­cludes six internal NuBus expansion slots to add cards (such as additional network interfaces), as well as six exter­nal ports to accommodate periph­erals (such as hard disks and printers) and LocalTalk network connections.

The Macintosh IIx also offers advanced color and gray-scale graphics capabilities, and can be used with a wide range of monitors. For floppy disk storage, the Macintosh IIx uses the unique 1.4-megabyte Apple FDHD SuperDrive, which allows it to read from and write to not only 3.5-inch Macintosh floppy disks, but also the 3.5-inch disks used in many other types of personal computers. An internal Apple hard disk-with up to 160 mega­bytes of capacity-can also be installed, as well as a second SuperDrive. The Macintosh IIx is compatible with virtually all Macintosh applications, and comes standard with Apple's MultiFinder operat­ing system and HyperCard, a tool for custom software solutions.