Difference between revisions of "Macintosh LC" 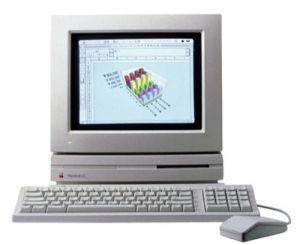 Powered by the Motorola 68020 CPU at 16MHz. Apple planned this "Low Cost" system to target education markets, and the Apple IIe Card helped phase out the use of Apple II systems in schools. The LC was available either with two floppy disk drives or a hard disk drive and floppy disk drive.

Replaced by the Macintosh LC II.

Released in October 1990, the Mac LC was named for its low cost. It was aimed at the home market, and included a 16 Mhz Motorola 68020 processor. It shipped inside a newly designed small case and was one of the first Macs to come bundled with a microphone. It also came with a new PDS slot, that became a standard in the LC family until its demise in early 1998. The LC was priced at $2,400, and was discontinued in December 1992.

Single "LC PDS" port for expansion needs. Common upgrades include the previously mentioned IIe card or an Ethernet card, which could also include a socket for a math co-processor as the LC did not include one (this will vary depending on card manufacturer).

The Apple Macintosh LC personal computer is Apple Computer's lowest­ cost color-capable Macintosh. Combin­ing the flexibility of a modular system with a sleek new design, the Macintosh LC gives you a range of options for larger screens, color displays, and system expansion, all at an even more affordable price.

The computer features a 16-megahertz 68020 microprocessor that increases system responsiveness more than 100 percent over the Macintosh SE and the Macintosh Classic. The Macintosh LC also offers built-in support for three Apple monitors­ including the Macintosh 12" RGB Display, the Macintosh 12" Monochrome Display, and the AppleColor High-Resolution RGB Monitor. This means you can choose the monitor you want to work with-without having to add a separate video card.

Right from the start, with a Macintosh LC you can enhance graphics, presenta­tion materials, and other documents with a range of shades and colors-256 colors on the Macintosh 12" RGB Dis­play, 16 shades of gray on the Macintosh 12" Monochrome Display, and 16 colors on the AppleColor High-Resolution RGB Monitor. With an optional Macintosh LC 512K VRAM (video random-access memory) SIMM (Single In-line Memory Module), the system is capable of generating even more colors or shades of gray on all three monitors.

The Macintosh LC also provides an important new Macintosh capability: sound input. Macintosh computers have always offered sound output, but the Macintosh LC has been designed so you can add sounds to documents created with the computer.

The system comes standard with the 1.4-megabyte Apple SuperDrive disk drive, which allows you to work more easily in different computing environments because it can read from and write to 3.5-inch disks initialized for the Macintosh as well as MS-DOS, OS/2, and ProDOS. In addition, a 40-megabyte internal hard disk drive accommodates large files and applications. Seven built-in ports allow you to expand the system with popular periph­eral equipment such as additional hard disks, scanners, and printers. Built-in net­working makes it easy to connect to dif­ferent networks for sharing information. And a processor-direct slot allows you to add a high-performance expansion card for additional graphics, communications, and other capabilities.