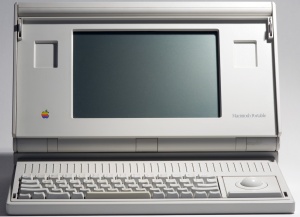 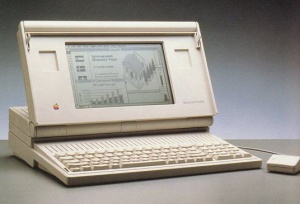 The Macintosh Portable was the first "laptop" style Macintosh, though due to the weight it was not very practical for laptop use. Apple Computer later released the Macintosh PowerBook 100 which is far more convenient as a laptop.

The Apple Macintosh Portable personal computer offers com­plete Macintosh functionality in a portable design. It runs virtually all current versions of Macintosh software and provides full com­patibility with other Macintosh hardware. In addition, the all-in-one design of the Macintosh Portable makes it ideal for users who want to take their work with them. Everything a user needs - CPU, screen, keyboard, pointing device, battery, and disk stor­age - is integrated into a single, easy-to-carry package.

The Macintosh Portable also delivers the superior graphics that people have come to associate with the Macintosh. Its high-contrast Active Matrix Liquid Crystal Display has such a fast response rate that the Macintosh interface looks and feels just the way it does on any other Macin­tosh computer. It also displays the full width of a letter-size page, and makes the screen easy to see in almost any lighting condition and from almost any angle.

Customers will especially ap­preciate the long battery life and intelligent power management provided by the Macintosh Portable. Unlike most battery­ powered computers, which operate for two to three hours before batteries need recharging, the Macintosh Portable can provide 6 to 12 hours of operation, depending on the system configuration and usage. To conserve power and extend battery life, the Macintosh Por­table includes a special micro­processor that manages power use. And a Battery desk acces­sory monitors and displays battery power levels.

The Macintosh Portable is equipped with all the standard Macintosh SE architectural features, namely the VIA, SCC, SWIM, and SCSI chips. Sound is generated by the same sound circuitry as in the Macintosh II (Apple Sound Chip and dual Sony Sound Chips). Video is generated by a separate circuit and memory that drives the input to a flat-panel display.

The Macintosh Portable contains a special version of the Motorola 68000 microprocessor that conserves battery power and yet provides high-performance processing. The complementary metal oxide semiconductor (CMOS) 68000 micro­processor consumes less power than its non-CMOS counterpart, and operates at 16-megahertz clock speed-twice that of the 68000 in the Macintosh SE computer.

Main memory (RAM) is expandable to 2 or 5 MB by using internal expansion cards (1 or 4 MB).

The Macintosh Portable Active Matrix Liquid Crystal Display (LCD) provides very high contrast - up to five times that of standard LCD screens - to offer the superior graphics capabilities that support Macintosh applications, including animated graphics. And because of the fast response rate of the Active Matrix LCD, Macintosh Portable users can see the cursor move when they drag it across the screen with the mouse or trackball; with other battery ­operated computers, the cursor is harder to follow because it disappears when moving. The Macintosh Portable screen also can be viewed clearly in most lighting condi­tions - especially in bright light - and from almost any angle. A transistor under every pixel of the Active Matrix LCD provides the fast response for the Macintosh user interface.

The Apple Sound Chip supports stereo sound at a sampling rate of up to 44.1 kilohertz.

The PDS is a high-performance slot connected to the microprocessor bus that will support one expansion card. (Note: The PDS is not compatible with the SE, SE/30, or NuBus expansion slots.)