Difference between revisions of "Macintosh PowerBook 1400" 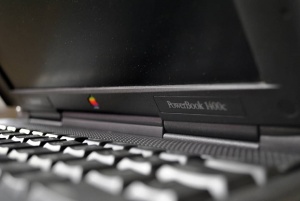 The PowerBook 1400 is unique in that the case has a "skin" feature where a portion of the top lid can be swapped for different designs.

Announced in October 1996, The PowerBook 1400 was a partial answer to a number of questions about recent PowerBooks. Powered by the same 117MHz PowerPC 603e as the Macintosh PowerBook 5300, the 1400 was the first PowerBook to include an internal CD-ROM drive (6X). The bay for the sleep-swappable drive could also accommodate a variety of other storage options, including MO and zip drives. The RAM came in stackable modules (another PowerBook first) allowing for up to 64 MB of RAM. The 1400 also included an Internal expansion slot for video-out or Ethernet cards, and two PC Card slots that could accommodate two Type II PC Cards or one Type III PC Card. Faster models with a small L2 cache and an 8x CD-ROM drive were also released. The 1400 was discontinued early in 1998.