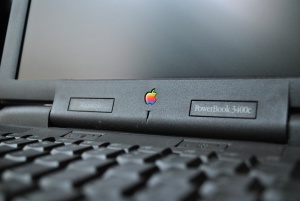 The PowerBook 3400c is a similar case design as the Macintosh PowerBook 5300 but has integrated speakers on the outside of the lid, giving the top a curved appearance.

When it was announced in February 1997, the PowerBook 3400 was the fastest portable computer in the world. After several years of PowerBook trouble, Apple hoped to revitalize its portable market share with this new PCI-based model. Its drive bay was compatible with the older Macintosh PowerBook 5300 model, and it was the first PowerBook to utilize the 1 MB IrDA Infra-red standard. The 3400 ranged from $4,500 for 180MHz and no CD-ROM to $6,500 for 240MHz, fully loaded. The 240MHz model was announced at the same time as the slower models, but shipped several months later.