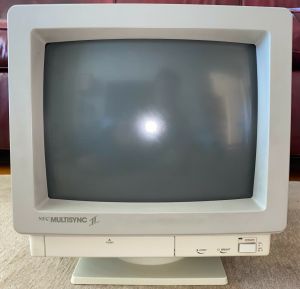 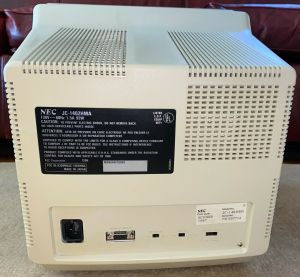 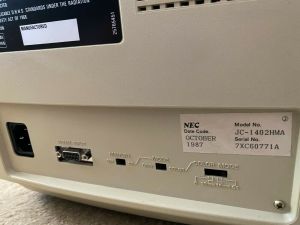 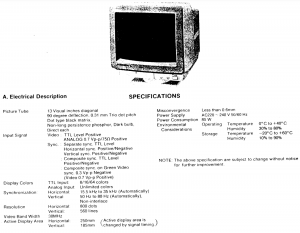 The NEC MultiSync II was a monitor released by Nippon Electric Company in 1988 as an updated version of the NEC MultiSync JC-1401P3A. While this iteration moved the most used controls up front internally it was much the same monitor as the previous model.

The MultiSync II was a 15KHz capable 13" CRT with the capability of taking both TTL (MDA), Digital (Hercules/CGA/EGA), and Analog (VGA/SVGA) signals. The highest resolution possible per the guides was 800x560 pixels non-interlaced, and it could handle all the way to 32-bit true color in VGA mode.

The monitor utilized a 9-pin cable, and came with a 9 to 15-pin 3 row D-Sub adapter to allow for it to be attached to newer VGA capable computers, and was even quite usable with SVGA just a few years later, albeit the lower dot pitch more inline with a lower-end VGA monitor at that point would not make this the best choice for that. It is also mentioned in some literature as having other adapters available for it for other platforms than just PC Compatibles.

The controls in back allowed you to configure the monitor to be used in different scenarios, including a "automatic/manual" mode that configured whether the monitor auto-detected color depth and a Gray/Color mode switch that also allowed limiting the pallet in color mode to 4, 8, 16, 32, or 64 colors.

The controls in front, hidden under a flip-down panel included a 2 way switch that allowed you to switch between a Monochrome emulation mode, a common feature on higher end EGA monitors of the time, and a second switch to choose the phosphor color you wanted with options for B&W, Amber, and Green mono modes, as well as the usual controls for brightness, contrast, screen horizontal and vertical size, as well as horizontal and vertical positioning.

A downside to this monitor is switching graphics modes leads to repositioning of the image, and since this uses an almost entirely analog circuit to do this, it cannot store the positioning in memory and automatically reposition the image. This is particularly noticeable when moving from 80x25 column text mode or 320x200 graphics modes to a higher resolution graphics mode such as 640x480p or 800x560p.