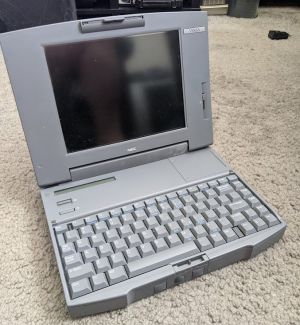 The NEC Versa 40E was a notebook computer released in 1994 by NEC Technologies based on the intel 80486 processor. It was their update to the original NEC UltraLite Versa that made many updates to the original design requested by users.

the NEC Versa 40E was a part of the "E" series models released in 1994 after the Ultralite Versa with multiple improvements, many of which were critiques of the original Ultralite Versa. NEC decided to drop the Ultralite name because it was "too complicated" (ThinkPad: A Different Shade of Blue - book). Specifications are below. The 40EC shared the product line with the 50E (50MHz) and the 75E (75MHz). They are also closely related to the Versa V models with non-removable screens.

Non-Touch models shipped with MS-DOS 6.21 and Windows 3.1, while touch models shipped with MS-DOS 6.21 and Windows for Pen Computing (3.1) installed. Touch screen support was almost somewhat of a "Secret Item" early on as well as the 1-800 number for NEC was located in the manual to request information about the touch display options.

The Touch Displays had the screen slightly offset to make room for a larger PCB shared with the contrast/brightness slider(s) with the digitizer circuitry, which attached to a 5-wire capacitive touch 3M digitizer, and provided a 1/8" phono jack for the wired stylus/pen that came with it. The removable screen feature also allowed the screen to be removed and flipped over, and the latch flipped, to convert the Versa into a full blown Tablet. There is also a removable blanking plate behind the screen with a snap-in holder for the stylus-pen, which was eliminated for later models.

The Versa E-series soldiered on until sometime in late 1994 or maybe even early 1995 and shared clock speeds and CPU and general design with the non-removable screen Versa V/50 and V/75. Because the nameplates on the Versa E-series just said "Versa" on them instead of "Versa x/xx", people get the models confused, often confusing the Versa E with the Versa V.