Difference between revisions of "Open Transport" 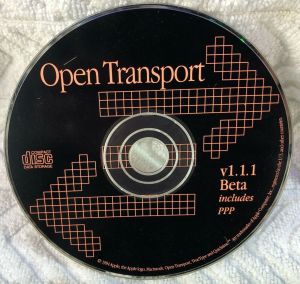 The independence of the APIs from the underlying networking or transport technology is called transport independence and is one of the cardinal features of Open Transport. Whereas the APIs are independent of the networking system in use, the specific set of functions you call does depend on the nature of the protocols. For example, you use different functions for a connection-oriented protocol like AppleTalk Data Stream Protocol (ADSP) than for a connectionless protocol like Datanet Delivery Protocol (DDP) or Internet Protocol (IP).

Other important features of Open Transport are its support of multihoming and multinodes. Multihoming allows multiple Ethernet, token ring, FDDI, and other network interface controller (NIC) cards to be active on a single node at the same time. In addition to selecting the type of network connection, the user can select a particular device to be used for the network connection.

Multinode architecture is an AppleTalk feature that allows an application to acquire node IDs that are additional to the standard node ID that is assigned to the system when the node joins an AppleTalk network. Multinode architecture is provided to meet the needs of special-purpose applications that receive and process AppleTalk packets in a custom manner instead of passing them directly on to a higher-level AppleTalk protocol for processing. Multinode IDs allow the system that is running your application to appear as multiple nodes on the network. The prime example of a multinode application is Apple Remote Access (ARA).

The Open Transport API consists of two types of functions: utility functions, which are implemented in header files and software libraries; and interface functions, which are implemented by the underlying software modules. Because the interface functions are executed by the software modules, the same function might operate somewhat differently depending on the specific module or modules that executes it. Where such dependencies exist, they are described in the chapter describing a particular protocol.

In accordance with XTI, the Open Transport API supports protocol options. An option is a value of interest to a specific protocol. For example, an option might enable or disable checksums or specify the priority of a datagram. The available options and their significance are defined by each implementation of each protocol. Every option has a default value, and you can almost always use the default values and not specify any options. It is important to note that, because each option is protocol dependent, specifying a nondefault value for an option decreases or eliminates the transport independence of your application. Protocol options are described throughout this book with the protocol to which they apply.

The software modules are implemented as Streams modules. The Streams architecture is a UNIX standard in which protocols (and other service providers) are implemented as software modules that communicate between each other using messages. Open Transport conforms to the Transport Provider Interface (TPI) and Data Link Provider Interface (DLPI) standards, which describe the content and ordering of the messages between modules. In a Streams environment, all modules have the following attributes:

The Open Transport Streams modules communicate with hardware drivers, which in turn control the flow of data through communications cards or built-in ports. Normally, the user selects which card or port to use through the Chooser. Your application can use the default port for a particular protocol or can configure Open Transport to use a specific port.

Open Transport supports multihoming; that is, an individual node can have more than one hardware device (ports or cards) for a given type of transport. For example, a single computer can have two Ethernet cards, and the user can select which card to use.

About the TCP/IP Protocol Family

The TCP/IP protocol family is a set of networking protocols in wide use throughout the world for government and business applications. The TCP/IP protocol family includes a basic datagram-delivery protocol, called Internet Protocol (IP); a connectionless datagram protocol called User Datagram Protocol (UDP) that segments data to handle larger datagrams than those allowed by IP; and a connection-oriented data stream protocol that provides highly reliable data delivery, called Transmission Control Protocol (TCP). In addition to these three fundamental protocols, TCP/IP includes a wide variety of protocols for specific uses, mostly at the application-protocol level.

The TCP/IP services provided by Open Transport include implementations of the TCP, UDP, RARP, BOOTP, DHCP, and IP protocols, an application interface to the domain name resolver (DNR), and utility functions you can use when creating and resolving internet addresses. You can open TCP, UDP, and RawIP endpoints and DNR mappers using the interfaces described in the chapters "Endpoints" and "Mappers" in this book .

A domain name resolver translates between the character-string names used by people to identify nodes on the internet and the 32-bit internet addresses used by the network itself. In that sense, its function is similar to AppleTalk's Name-Binding Protocol (NBP). Unlike AppleTalk, however, TCP/IP protocols do not specify a way for clients to register a name on the network. Instead, the network administrator must maintain a server that stores the character-string names and internet addresses of the servers on the internet, or each individual host must keep a file of such names and addresses. The Open Transport implementation of TCP/IP includes a DNS stub name resolver; that is, a software module that can use the services of the domain name system (DNS) to resolve a name to an address.

The nodes on a TCP/IP internet are known as hosts. A host that is addressable by other hosts has a host name and one or more domain names that identify the hierarchically arranged domains, or collections of hosts, to which it belongs. For example, the Open Transport team, part of the system software group at Apple Computer, might have a server with a fully qualified domain name of "otteam.ssw.apple.com." In this case, "otteam" represents the domain of hosts belonging to the Open Transport team, "ssw" represents the domain of hosts belonging to the system software group (which includes the Open Transport team plus several other teams), and so forth. A fully qualified domain name corresponds to an internet address, also known as an IP address, which is a 32-bit number that uniquely identifies a host on a TCP/IP network. An internet address is commonly expressed in dotted-decimal notation (for example, "12.13.14.15") or hexadecimal notation (for example, "0x0c0d0e0f").

To use the application interface to Open Transport's DNR, you must first open a TCP/IP service provider. Once you have done so, you can

The Open Transport TCP/IP services also include several utility functions. You can use these functions to

The new features of Open Transport include

Open Transport is compatible with existing AppleTalk networks and supports existing .ENET clients such as Soft Windows and DECnet. On the PCI-based Power Macintosh computers, this .ENET compatibility is provided by a module that maps .ENET calls to the corresponding DLPI calls.

Open Transport provides compatibility with 680x0-based computers by means of the following features: