Difference between revisions of "Power Macintosh 5300" 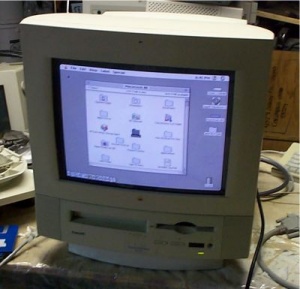 The 5300 was sold to the education market primarily while the "Performa" version sold to the general public. Not an overly powerful machine as it runs on a 100MHz PowerPC 603e, and these models tend to be heavy and annoying to move around.

The Power Macintosh 5300/100 LC features a 100 MHz PowerPC RISC 603e processor with 256K Level 2 Cache, 16MB of RAM (expandable to 64MB) and a 1.2GB hard disk drive. It also includes an Apple SuperDrive floppy disk drive, two expansion slots including one that can be used to add a low-cost, high-speed Ethernet networking connection, and an internal AppleCD 600I Plus tray-loading quad-speed CD-ROM drive. Built-in multimedia technologies include a video-out connector, video capture card, TV tuner, and 16-bit stereo sound in and out.