Difference between revisions of "Power Macintosh 7500" 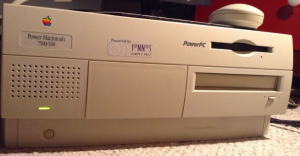 Based on the PowerPC 601 processor and PCI.

The Power Macintosh 7500 introduced a new wider, more accessible Centris/Quadra 650-style case. It was powered by a 100MHz PowerPC 601 processor (on a removable daughtercard), and had 24-bit composite and S-video input. It sold for $2,700, and was replaced nine months later by the Power Macintosh 7600.

The computer has a slot for an optional second-level cache SIMM with 256 KB to 4 MB of fast RAM.

The Power Macintosh 7500 and 8500 computers have three expansion slots using the industry standard PCI bus. The PCI bus is a nonsplit bus with 32-bit multiplexed address and data. The PCI expansion slots in these computers use a 33 MHz system clock. The Power Macintosh 7500 and 8500 computers accept standard PCI cards as defined by the PCI Local Bus Specification, Revision 2.0. The cards are required to use the 5 V signaling standard and to use the standard ISA fence described in the specification. Each computer provides a total of 50 W of power for its three expansion slots. Both 5 V and 3.3 V are supplied; the total power at both voltages must not exceed the 50 W maximum.