Difference between revisions of "Power Macintosh 9500" 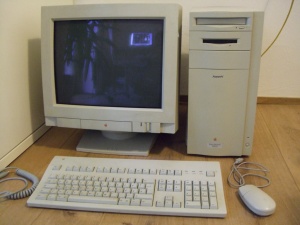 The 9500 is a PCI based Power Macintosh which features six expansion slots, one of which must hold the video card.

The 9500 was available in numerous configurations between 120-200MHz using the PowerPC 604 and 604e processors. There was also a dual CPU model with two 180MHz processors.

There are 12 memory slots on the board, and the system takes 168-pin DIMMs. The system can physically hold 1.5GB RAM but classic Mac OS versions may not be able to properly allocate that much.

The 9500 does not include onboard video, so you must install at least one PCI video card. As the target market for this sort of system would have included A/V professionals looking to use more powerful third-party video cards anyway, it makes sense to save the cost of onboard video. The 9500 would often ship with the IXMicro Twin Turbo 128 video card.