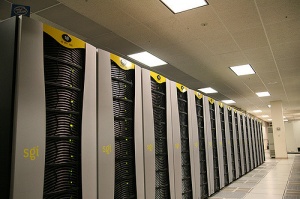 The Altix 3000 was the first generation of Altix systems. At the middle- and high-end it largely took the existing SGI Origin 3000 packaging and interconnect, and substituted Intel Itanium processors for the traditional MIPS CPUs. As a result many components can be swapped between the two families, such as routers, NUMAlink cables, etc.