From Higher Intellect Vintage Wiki
Revision as of 23:10, 16 September 2018 by Netfreak (talk | contribs) (→‎Graphics Subsystem)
(diff) ← Older revision | Latest revision (diff) | Newer revision → (diff)
Jump to navigation Jump to search
The printable version is no longer supported and may have rendering errors. Please update your browser bookmarks and please use the default browser print function instead. 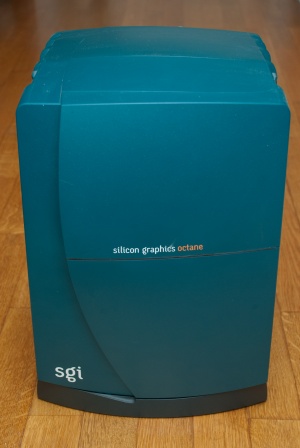 The Octane's system-board is designated as IP30. The system is based on SGI's Xtalk architecture. This means it does not use a system bus; instead it has a router Xbow that connects any two of its ports. One of the ports is used for the processor and memory subsystem, one is available for PCI (actually PCI-64) expansion and four are XIO slots (packet-based high-bandwidth bus, somewhat similar to HyperTransport). This makes it very similar to a single node of the SGI Origin 200 system.

The Octane allows 256 MB to 8 GB of system memory, using proprietary 200-pin DIMMs. There are two system board revisions. The first revision (part number 030-0887-00x, usually distinguished by a black handle) only supports 2GB of RAM while the later one (part number 030-1467-001, with a silver handle) supports up to 8GB. The -0887 revision of the mainboard will work with all 32-128 MB DIMMS and the stacked variant of 256MB DIMMS, but not the later single-board version (SGI P/N 9010036). The memory subsystem has vast reserves of bandwidth that can be directly served by the Xbow router to any XIO card.

Graphics on the Octane are provided by a series of cards: SI, SI+T, SSI, MXI. These are updated XIO versions of Solid Impact (SI), High Impact (SI+T) and Maximum Impact (MXI) from the SGI Indigo2 that were internally designated by SGI as 'MARDIGRAS'. The boards were accelerated and reengineered with faster geometry engine and texture modules to create their new versions: SE, SE+T, SSE, MXE. The SI/SE provides 13.5MB of framebuffer memory while the SSE and MXE have a 27MB framebuffer. The '+T' indicates an additional high speed RDRAM texture board which gives 4MB of texture memory, which is practically indispensable, though quite expensive and fragile. The SI/SE+T has one texture board while the MXI/MXE has 2 texture boards, however, the 2 boards in the MXI/MXE do not double the available texture memory to the system. It just doubles the texture performance.

Octane series supports Ultra Wide SCSI devices and has two SCSI controllers. System can have up to three internal 3.5" SCSI SCA devices. Octanes use special mounting sleds for the harddrives which are compatible with Origin 2000, Origin 200 and Onyx2. The system also has external Ultra Wide SCSI bus.

The Octane cases are large (W×H×D: 30×40×35 cm) and heavy (25 kg), yet there are no internal 5.25" drive bays, so external CD-ROM drives must be connected if desired. Extensions include video I/O, audio I/O, networking, realtime video compression boards, and external storage options (through SCSI, Fibre-Channel or Firewire). Octanes can use standard PCI cards with optional PCI cardcage aka 'shoebox' (which provides 2-full length and 1 half-length 5V PCI-64 slots), or a PCI to XIO adaptor (known as a 'shoehorn' which provides a single 3.3/5V 64-bit PCI slot).

Older Octanes can be upgraded with VPro graphics. The VPro Upgrade Installation Guide from Silicon Graphics states that V10 and V12 graphics board require an XBow revision 1.4 and Cherokee power supply. VPro V6 and V8 require a Cherokee power supply; any XBow revision will work. However, some users in the field have found that any version of VPro graphics will work with any power supply and frontplane. (Other users disagree.)

Octanes came from the factory with two ways to illuminate the lightbar mounted in the front of their case - a red LED to indicate a fault, and a pair of small incandescent lightbulbs for normal operation. However these lightbulbs will eventually fail. A popular remedy is to replace them with diffrent colord LEDs rather than using another bulb. An external step-by-step procedure was created by Kurt Huhn here, and additional information can be found in this forum thread.

Apparently the Number In a Can, or NIC, which stores the system serial number in many SGI workstations, can go bad and require replacement. On a single CPU module for the Octane this is a surface mounted 6-pin IC designated DS2505. It is possible to swap in the NIC from another module, as discussed in this thread.