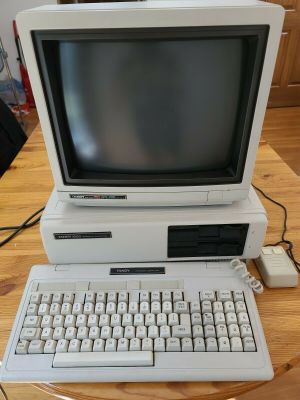 The Tandy 1000A is a PC Compatible based on the intel 8088 microprocessor. It's basically, just like the original release from 1984 the Tandy 1000, except with the addition of some quality of life updates and some changes that allow it to be expanded even further.

The Tandy 1000A was an update to the original Tandy 1000 that debuted in 1984. The most obvious technical change was the addition of a socket for a Intel 8087 Math Co-Processor on the motherboard, and the ability to utilize Direct Memory Access (DMA) via an additional 8-bit ISA Memory Board (allowing the 1000A to access up to 640K of RAM). It otherwise looks and runs identical to a regular Tandy 1000 (25-1000).

Hard Drives, Modems, and other accessories were also available from Radio Shack, however, were not popular options on this model. An original 20MB MF Hard Disk drive for the Tandy 1000A cost upwards of $4000, even in the catalogs that were outdated in the late 1990's. It seems the most common feature-set for the 1000A is 2x Floppies and the DMA/640K Memory Upgrade card.