Difference between revisions of "Tandy 1000 SX" 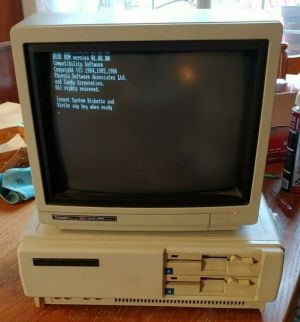 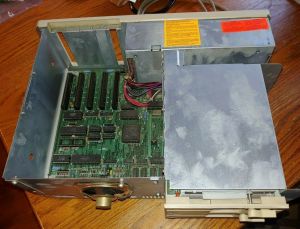 The Tandy 1000 SX was released in 1986, and is a PC compatible based on the intel 8088 microprocessor featuring some PC Jr. enhanced features. The 1000 SX is considered the successor to the original Tandy 1000 and Tandy 1000A models.

the Tandy 1000 SX updated the Tandy 1000 8088-based model to have a faster 6MHz CPU and 2 more expansion slots as it's primary upgrades inside the case. It can be told apart from the earlier 1000 and 1000A by way of the power switch being gray instead of black/red-lit, 5 Expansion slots instead of 3 viewable from the back, and typically white floppy drives in the front instead of black. The version of the 84 key keyboard bundled with the 1000 SX also differs in that it has various pre-boot functions printed above keys F1-F4 (turbo/IBM compatible mode, TV Mode, and such).