Difference between revisions of "Tandy 1000 TX" 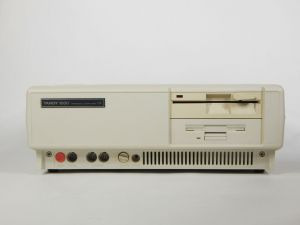 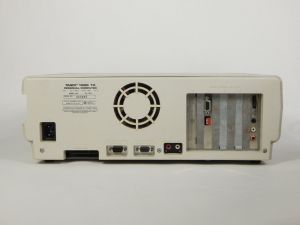 The Tandy 1000 TX features an 8 MHz 80286 microprocessor for far greater performance than ordinary PCs. This brings 80286 technology, previously found only in AT class machines, to an affordable PC. The 1000 TX boasts over six times faster throughput than a standard PC XT -- you'll fly through your applications.

The Tandy 1000 TX is outfitted with a new 8.89cm disk drive, ready to use MS-DOS 3.2 software released on durable, pocket-sized diskettes. Each diskette can store up to 720,000 characters, and you can internally add a second 8.89cm disk drive anytime. If you prefer, you can expand with a 13.3cm disk drive, so you can use existing 13.3cm software along with the new releases available on 8.89cm diskettes.

The Tandy 1000 TX comes with 640K RAM -- enough power to handle almost any application. Five card slots make it easy to customize the 1000 TX just the way you want. Add more memory, an internal modem, a hard disk card -- or add an additional card for connecting the TX to your environment.