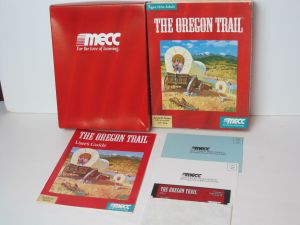 Danger. Disease. Death! Students must conquer these and other perils as they travel the treacherous trail across the unpredictable American frontier. And each sensational version of MECC's blockbuster classroom hit, The Oregon Trail, adds an exciting twist to the trail!

Kids ford treacherous rivers. They face dangerous weather. They live off the land. Their quest? To start new lives in Oregon's Willamette Valley - and to learn about U.S. history and geography, too. This historical adventure simulation has already sold more than a million copies to schools and homes across the country.

MECC has added many sensational versions of this educational classic to its trail mix. These spectacular versions of The Oregon Trail will take kids back to the thrilling days of the Old West with colorful graphics and realistic sound effects. With so many versions to choose from, The Oregon Trail is more popular today than ever!

"The Oregon Trail and the educational software industry have grown up together," said Dale LaFrenz, president of SoftKey School Division. "From its rudimentary beginnings in 1971 as a text-based simulation involving a teletype machine and an ancient mainframe computer, to its current incarnation as a best-selling interactive CD-ROM and lively Internet program, The Oregon Trail has come a long way. That this product has thrived for 25 incredible years is an especially remarkable fact in an industry in which many products disappear within a few months."

From its inception in 1971, The Oregon Trail has lead the way for the educational software industry, as evidenced by its colorful past:

The Oregon Trail was also a precursor to MECC's Oregon Trail online, part of the MECC Interactive Explorer Series (IES), which allows students to collaborate on an Oregon Trail learning adventure via the Internet. Students are teamed into "wagon trains" and work together to overcome challenges along the trail, in a fashion similar to the time-share approach of the early 1970s.

MECC software developer Wayne Studer, whose great-grandmother was born in a wagon on the Oregon Trail, believes another reason for the software's longevity and appeal is that it taps into the American psyche. "Most Americans have some element of the pioneering experience in their background and many can trace their ancestry back to the trails. The Oregon Trail explores the idea of taking your fate into your own hands, which is something modern-day emigrants also can relate to," he said.