Difference between revisions of "Windows 98" 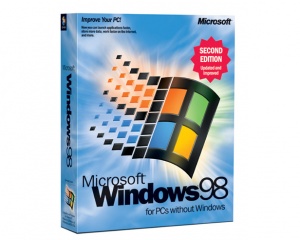 Microsoft Windows 98 is the latest version of the Windows operating system. Designed for consumers, Windows 98 allows users' PCs to work better and play better. Building on the breakthrough features of Windows 95, Windows 98 improves performance, reliability, Internet access and ease of use, as well as unlocking an exciting new range of PC hardware and entertainment capabilities.

Microsoft Windows 98 improves on key areas that keep users waiting on their PCs today, including opening applications an average of 36 percent faster, rendering Internet pages up to 25 percent faster and shutting down the PC up to two to five times more quickly than with Windows 95. In addition, Windows 98 can provide users an average of 28 percent more disk space through more efficient storage of data on the hard drive.

Key performance and reliability features include the following:

Windows 98 integrates both the navigational paradigm of the Web and graphical nature of HTML to provide users with a much richer and simpler experience. Windows 98 delivers a simpler, easier experience that allows users to take full advantage of the Internet, making it easier for users to find information regardless of where it is located, get help, keep their systems updated and install new hardware.

Key benefits of improved ease of use and Internet integration include the following:

A new generation of hardware and entertainment

Just as Windows 95 enabled a range of new software applications, Windows 98 empowers a new range of hardware and entertainment functionality. Now, not only can games run as well on Windows 98-based PCs as on traditional game console devices, Windows 98 also includes native support for Universal Serial Bus (USB), which makes setting up additional hardware as easy as plugging in a toaster. Windows 98 also provides DVD and television reception capabilities, allowing a PC with a TV tuner card to seamlessly receive and display television and other data distributed over broadcast networks.

Key new hardware and entertainment features include the following: